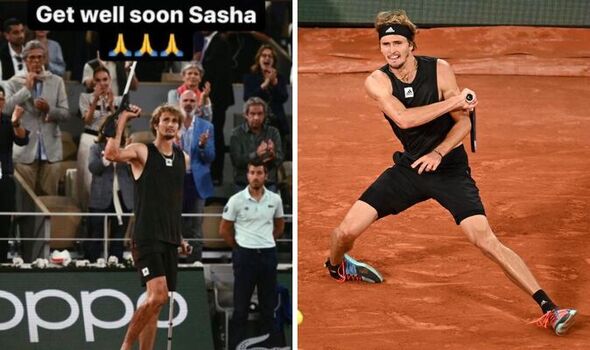 Novak Djokovic has sent his well wishes to Alexander Zverev after the German tennis ace was forced to retire from the French Open semi-final against Rafael Nadal through injury. Zverev had been in fine form at Roland Garros, getting his revenge on Carlos Alcaraz from the Madrid Open to reach the final four.

It set up a pulsating match with Nadal and the first set did not disappoint with both of them playing at the top of their game. The Spaniard came out on top to take a one-set lead after a tie-break and the second followed in a similar fashion.

Both players dropped serve four times with another tie-break looking inevitable. But just as Nadal won the point on his serve to force another tie-break, Zverev hit the floor after rolling his ankle.

The world No 3 screamed in pain as he clutched at his right ankle and it was immediately clear that he would be unable to continue. Zverev needed a wheelchair to exit the court before returning a few minutes later on crutches to confirm his withdrawal.

JUST IN: Rafa Nadal asked umpire if he could ‘take a p**s’ after Zverev injury

Nadal paid tribute to his rival in the immediate aftermath, admitting that wasn’t how he hoped to reach Sunday’s final. And 20-time Grand Slam champion Djokovic has now sent a message to the 25-year-old following his injury.

“Get well soon Sascha,” Djokovic wrote in his Instagram story. Nadal went back to see Zverev after the German tennis star was wheeled back to the medical room and admitted later that it was tough “to see him crying”.

“I know how much he was fighting to win a Grand Slam,” Nadal said. “For the moment he was very unlucky. I’m sure he’s going to win much more than one and I wish him all the best.

“It had been a super tough match, over three hours, we hadn’t finished the second set. It’s one of the biggest challenges on the tour today when he’s playing on this super high level. Difficult to say a lot of things in this situation.

“For me, to be in the final of Roland-Garros one more time is a dream. But at the same time, to finish that way, I have been there in the small room with Sascha, to see him crying is a very rough moment. All the best to him and his team.”