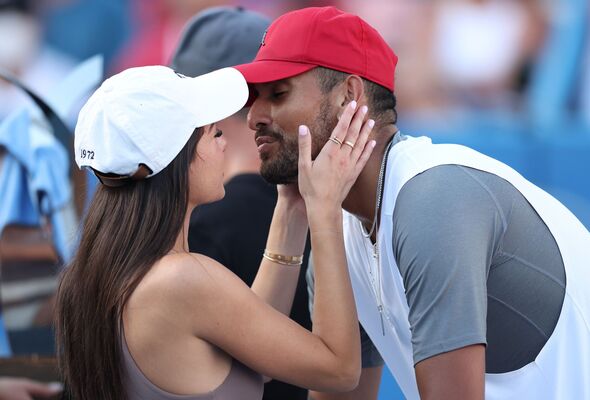 Nick Kyrgios will have a ‘secret weapon’ by his side when he aims to win his first singles Grand Slam at the Australian Open this month. The 27-year-old thrived last year reaching the Wimbledon final and attributed his success to partner Costeen Hatzi. Kyrgios is featured heavily in the new tennis Netflix documentary, Break Point, and his partner is a crucial part of his life as audiences get a chance to see the Australian tennis star in a whole new way.

Flamboyant figure Kyrgios started dating Hatzi in December 2021 and she has subsequently followed the World No.21 across the globe supporting him at every tournament from the stands. There is a big focus on the pair’s relationship in the Netflix series as Kyrgios takes centre stage for much of the opening episodes, and he seems unequivocally devoted to her.

According to SportingNews the pair met when Kyrgios was interested in buying a mirror from Hatzi – who has her own small interior brand Casa Amor. After scrolling through her business account the tennis star messaged her on Instagram and arranged to buy a mirror. After meeting Hatzi the pair fell in love and were side-by-side during the 2022 season.

Kyrgios won the doubles title at the Australian Open last year and Kyrgios said his new love interest was a contributing factor to a successful year. Speaking to the Australian Associated Press, Kyrgios was asked if Hatzi was the ‘secret weapon’ of Team Kyrgios? He replied: “That’s it, that’s it.”

“It’s been a very successful year, not only on the tennis court but just in general. I’m feeling really, really good about everything and just enjoying life,” the world No.21 said. “And meeting Costeen was probably my favourite moment, probably the best thing that’s happened to me – and the year I’ve had as a highly motivated and highly pushed player, has been because of her. That’s been my favourite experience.

Hatzi has also persuaded her boyfriend to play at this year’s French Open, for the first time since 2017, despite the Australian’s dislike for playing on clay courts. “My girlfriend just wants to see Paris,” said Kyrgios last year.

Despite Kyrgios having a reputation for being volatile and smashing his rackets after defeat at last year’s US Open, his partner said the Australian is ‘not as crazy’ as some people think.

She said: “We met online and we’ve been hanging out every day since. He’s not as crazy as everyone thinks he is. I never really watched a tennis game in my life so this is all new for me.”