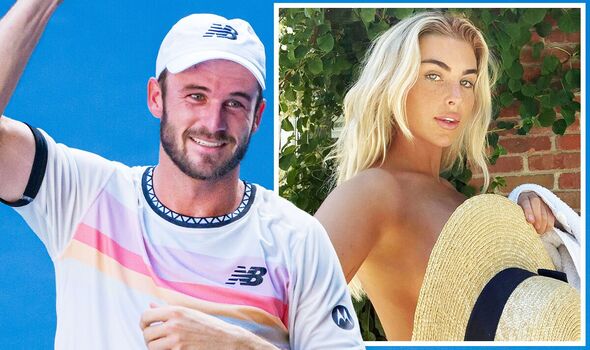 The Americans have made the Australian Open their own with three players making the quarter-finals of a Grand Slam for the first time since 2005. But after the exits of Sebastian Korda and Ben Shelton at the last eight stage, only one remains. Tommy Paul defeated his 20-year-old compatriot Shelton 7-6(8), 6-3, 7-5, 6-4 to advance to the semi-finals of a major for the first time in his career.

He is also the first male American player to reach the semi-finals of the Australian Open for the first time since Andy Roddick in 2009. The world number 35 soaked up the adulation of the Rod Laver crowd and was cheered on by a very special person.

The tennis star’s girlfriend Paige Lorenze boasts 400,000 Instagram followers and uploaded a clip from Paul’s post-match interview as he expressed his delight at making it to the last four. A modern-day ‘thrift freelancer, ski racer, and social media influencer’, Paul’s partner has several business brands and is also the host of her podcast, “PAIGE by Paige’.

She is often seen collaborating with various brands to enhance her popularity as an internet personality and influencer. The couple initially made their relationship public in October 2021 and have rarely posted pictures with each other.

It was only on the first day of the year that Lorenze teased their relationship on her official Instagram account, where she posted a black and white photo of them, tagging Tommy and captioning “lover” as she wore a skimpy bikini.

Hailing from Guilford, Connecticut, the stunning WAG has a background in sports, having previously been a ski racer. She trained at the Burke Mountain Academy in Vermont from 2012 to 2016 and competed in events between 2014 and 2016, according to FIS Ski. Although she is no longer active, she has competed in alpine ski racing.

“I was fortunate enough through alpine ski racing to travel across the country and the world,” she told Rowing Blazers last August. “Skiing shaped me because I had to learn at a very early age how to prioritise my life, how to be mentally and physically strong, and how to overcome disappointment and battle back from adversity and injury. I learned how to self-advocate, be independent, and to be pushed beyond my comfort zone in extreme conditions.”

She has also launched her very own fashion label with Dairy Boy. The company is a celebration of her Vermont roots made for people who, much like herself, “shamelessly enjoy life’s simple pleasures and embrace what makes them happy.” She sells jumpers, tracksuit bottoms and baseball caps, all of which are currently sold out.

Expanding on what the brand is about, Lorenze wrote on the shop’s website: “Although Dairy Boy was inspired by the movement to go back to whole milk (tbh i never stopped drinking it lol), the brand has a much deeper meaning of comfort and nostalgia. It reminds me of Vermont. After I quit skiing and left the mountains, I moved to New York and thought I had to recreate myself – be someone else, someone new. Well, here’s a reminder you don’t! It’s cool to be who you are. It’s cool to be proud of where you’re from even if it’s in the middle of nowhere.”

She has been regularly updating her social media followers with pictures while Down Under, posing in a stunning bikini shot in Melbourne earlier this week.

Paul will now take on favourite Novak Djokovic in Friday’s semi-final as he bids to secure an unlikely spot in the final in Melbourne on Sunday. Speaking after his victory, he admitted: “I like to think the last four years of my career has just been like steady steps moving up. I mean, that’s what it’s felt like. I feel like hopefully 2023 is the year where I really make a big jump.”

His mother jetted in from the States to be courtside to watch the win over Shelton, with Paul telling reporters: “She’s done a lot for me, from when I was really young until now. She’s sacrificed a ton to get me here. She deserves to be here and deserves to see me win big matches.”