Ashleigh Barty is destined to become the most marketable athlete in Australia – surpassing Roger Federer – regardless of how she fares at the business end of the Australian Open.

The world No.1 women’s tennis star currently sits only behind 20-times major winner Federer on a table which measures the “likeability” and “awareness” of athletes within the Australian public. 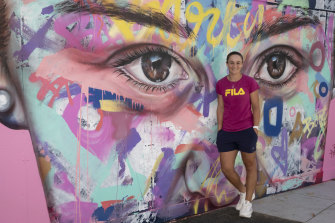 Ashleigh Barty in front of the mural of her at Melbourne Park.

Despite missing nearly the whole 2020 tennis season after staying home due to health concerns surrounding the coronavirus pandemic, Barty is ahead of Rafael Nadal and retired athletes including Cathy Freeman, Mick Fanning, Sally Pearson and Ian Thorpe.

The Gemba Group’s most recent “asset power” rankings have 24-year-old Barty well out in front of other Australian athletes, and easily at the top of the list for all female athletes – including Serena Williams – when measuring their pulling power in the Australian market.

Australia’s high-drawing but controversial men’s player Nick Kyrgios is not in the top 10.

“I think she’ll eventually surpass Federer whether she wins the Open or not,” said Gemba’s managing director Andrew Condon.

“When you look behind the numbers, her likeability is higher than Federer’s, it’s just her awareness that needs to grow.″⁣

“When you look behind the numbers, her likeability is higher than Federer’s, it’s just her awareness that needs to grow.

“More exposure through on-court TV time, but also through other media commitments and sponsor commitments is only going to put her in front of a wider audience more often, which will see her push up that likeability metric. 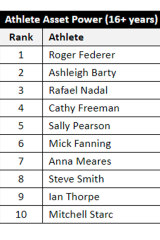 “She’s probably going to struggle to become more liked, it’s probably about her broadening her appeal.

“It sounds silly, because you and I go, ‘everyone knows who Ash Barty is’, she’s incredibly well liked but her awareness is still around 70 per cent of Australians are aware of her, whereas at Kyrgios is 78 [per cent] – and that’s for all the wrong reasons.

“The more we see Ash, the more we’re exposed to her … through other media commitments like the Uber Eats [TV] ad, or the Vegemite campaign, are only going to fuel that awareness.”

Barty’s current sponsors include FILA, HEAD, RADO, Jaguar, Vegemite, Banana Boat, Esmi Skin Minerals, Gillette Venus, YoPro yoghurt and Uber Eats. Barty and Kyrgios have both been central to this year’s Uber Eats campaign which are getting heavy exposure during the Australian Open.

Barty’s management consistently sign iconic and likeable Australian brands when doing new deals. Her connection with the Uber Eats campaign at the Australian Open is now in its second year.

“There must be an authentic story to tell and reason behind the partnership,” an insider said. 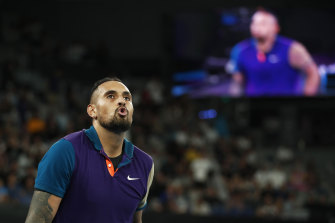 More Australians are aware of Nick Kyrgios, but he is not so widely liked as Ash Barty. Credit:Getty Images

The Queenslander is a sponsor’s dream but, as an athlete who’s been up near the top or at least close to it for a few years now, some believe the Australian public undervalue her achievements. Former Australian champion Judy Dalton last week said Barty would be better valued if she was the men’s world No.1.

Kyrgios also bypassed the bulk of the tennis tour in 2020, but the colourful Australian registered a career-high in off-court earnings.

It has been revealed one of the reasons behind the renewal of the Kyrgios brand is US super agent Stuart Duguid, who believes the 25-year-old can “eclipse” the marketability of tennis giants such as Federer, Nadal, Serena Williams and Naomi Osaka if he ever wins a grand slam.

UberEats would not reveal any details about what either Kyrgios or Barty received for their roles in the current TV campaign, which also features actor Sacha Baron Cohen as a rogue chair umpire.

But Condon was adamant the two athletes should have been on equal financial footing – perhaps even a greater pay-day for Barty as the best female player in the world.

“There is no doubt from my perspective that Ash Barty and Nick Kyrgios should have been paid at least the same, if not Ash Barty paid more for that commercial,” Condon said.

“The Ash Barty and Nick Kyrgios Uber Eats commercial is a great example of the same athlete doing the same job and therefore should be getting the same money.

“Ash Barty is the No.1 tennis player in the world – there’s only two of them – and she should be, in that context, getting more.”

While the metrics have Kyrgios at close to an 80 per cent return for “awareness” in the market, he said it would be hard for Barty to climb well above that.

“If Ash continues to win, she might be an exception to the rule and break through the 80 per cent mark but that is a level reserved only for highly successful international athletes over an extended period of time.”