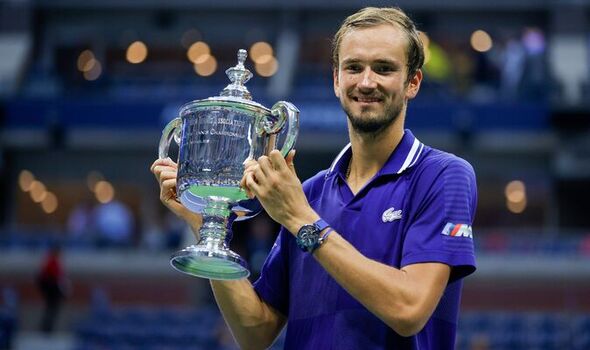 Daniil Medvedev has responded after learning he will be able to attempt to defend his maiden Grand Slam title at the US Open later this summer as the tournament ruled out following in Wimbledon’s footsteps to ban Russian and Belarusian players. The world No 1 will be unable to compete at the All England Club this month but will be allowed to play in Flushing Meadows.

The US Open confirmed on Tuesday that they would not be banning Russian and Belarusian players from competing at the tournament in response to the war in Ukraine. “We recognize that each organization has had to deal with unique circumstances that affect their decisions. Based on our own circumstances, the U.S.T.A. will allow all eligible players, regardless of nationality, to compete at the 2022 U.S. Open,” organisers wrote in a statement.

It means world No 1 and reigning US Open champion Medvedev will be given the chance to defend his first-ever Grand Slam title in August, having been banned from Wimbledon with the All England Club barring Russian and Belarusian athletes from competing in accordance with government guidelines.

And last year’s winner in New York has now reacted to the “great news” while playing on the grass in Halle. “It’s great news,” he said on Wednesday. “I’ve always said I will follow the rules and play where I can play. I just want to show my best tennis.

“I’m happy to be able to defend my title. I have some amazing memories from last year. That was one of the most special tournaments for me.” While he has been banned from competing at the grass-court Grand Slam, Medvedev has been proving himself on the surface outside of the UK, having also been banned from the LTA’s warm-up events in the country.

He reached the final of the Libema Open last week and downed former runner-up David Goffin in straight sets in Halle yesterday, plus has already committed to attempting to defend his Mallorca Open title next week. And the 26-year-old still hasn’t ruled out finding another tournament to play while Wimbledon is being staged.

“I will play Mallorca next week for sure, I want to defend that title,” he said. “Without Wimbledon coming up, I don’t have to preserve my body and I can play three tournaments in a row. I’ll then spend a few more days in Mallorca and then return to the south of France to train for the hard courts. I may add another tournament to my list, but I’m not sure yet.”

The Russian has been gracious in his response to Wimbledon’s ban so far, though previously claimed he didn’t completely understand the reasoning. The ATP and WTA have stripped all ranking points on offer at the tournament as a sanction for banning Russians and Belarusians but Medvedev previously claimed: “I would like to play in Wimbledon, even if there are no points at stake.”