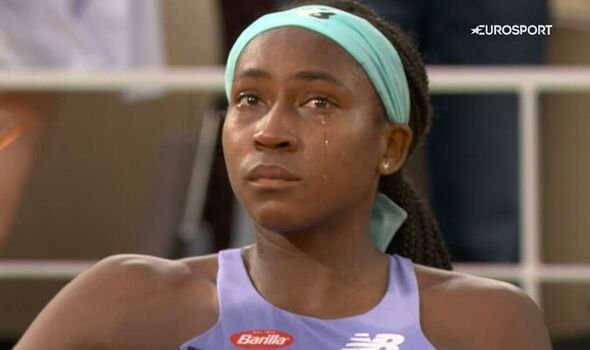 World No 1 Iga Swiatek claimed her second French Open title as Coco Gauff froze in her first Grand Slam final. The Pole beat the American teenager 6-1 6-3 to record her 35th consecutive win and equal the 21st-century record set by Venus Williams in 2000.

Swiatek, 21, also won her sixth consecutive title and has yet to lose since taking over at the top of the rankings from the retired Ash Barty in April. She won her first French Open title here in September 2020 and in the absence of the Australian, she has established herself as undisputedly the best female player on the planet.

Gauff, 18, was the youngest woman to reach a Grand Slam final since Maria Sharapova at Wimbledon in 2004. The 17-year-old Russian shocked Serena Willams then but there was to be no upset by the world No.23 today in an anti-climactic final which was all over in 68 minutes.

As Swiatek climbed up into the player’s box to celebrate with her team, Gauff broke down in tears on her chair. The American teenager looked nervous from the start and served a double fault as she lost her opening service game. She was 0-3 and a double break down after only 15 minutes and it took 23 minutes to claim her first game at 4-1 when Swiatek hit a backhand return long. There was huge applause from the crowd on Court Philippe-Chatrier who had wanted to see a contest.

But although Gauff saved a first set point with a forehand winner, she made a backhand error on the second and lost the first set in 32 minutes. Swiatek’s relentless groundstrokes – especially her fearsome forehand – were just too consistent for Gauff who hit only seven winners while making 14 unforced eros.

The American seemed to have settled down at the start of the second set and broke the Swiatek serve in the first game when the No.1 seed made three unforced errors. But after Gauff held, the Pole went on a run of winning 16 of the next 20 points to take a stranglehold on the match.

Gauff held to take the score to 3-5with the help of a 190kmh ace down the middle, but Swiatek took her first match point when Gauff looped a forehand return long.

The American can gain compensation by winning the women’s doubles final on Sunday.