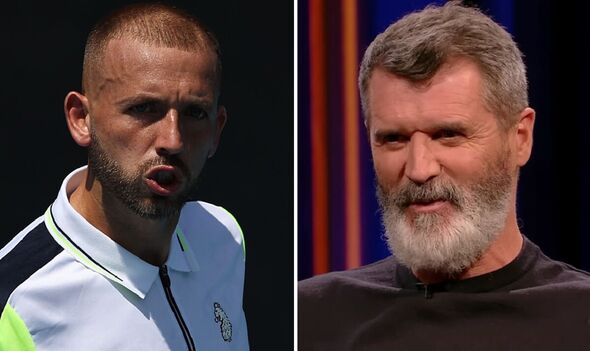 Dan Evans kept his cool during an extreme heat break at the Australian Open by watching Roy Keane hold court. Soaring temperatures saw play suspended on the outside courts with the British No 2 leading 2-1 in sets against world No 91 Facundo Bagnis.

The 25th seed relaxed during the three-hour delay catching up with an interview with the former Manchester United captain on RTE One’s Tommy Tiernan Show. And Evans returned to Court 7 to win 6-4 4-6 6-4 6-4 to set up a second-round tie with London-based Frenchman Jeremy Chardy.

“During the break I had a bit of food. I showered, obviously. Had a bit of food. Stretched out and then I had a lie down. I actually watched Roy Keane on that Tiernan show,” Evans revealed to journalists.

“It was quite a good 37 minutes, if you really want to know what I did! I’m looking on YouTube and stuff. I had wanted to watch it. I had seen clips of it. I have not finished it yet.”

MUST READ: Australian Open umpire dives off chair and chases fan after theft

Evans got his match finished before the mad Melbourne weather changed to torrential rain and play was stopped again. Earlier, the British No 2 had struggled in the sun without a hat.

“I just never wear one,” he said. “The heat doesn’t bother me. I have just never worn a hat and I have never liked wearing one. Doesn’t feel comfortable. Big ears, I guess.

“But I felt the break didn’t really come at a good time for me. I had won the third set. I felt like he was struggling. He was going to the towel a lot at the back of the court a lot. And then then I had to start again.

“It’s strange because I never even knew about the rule, to be honest. I just knew it was hot. Once the wind stopped it was horrible.

“I came back from the toilet, and then the guy said: ‘You’re going in’. I didn’t feel great going back out but then I actually played very well.”