Berrettini and Tomljanovic lift lid on dating as tennis players 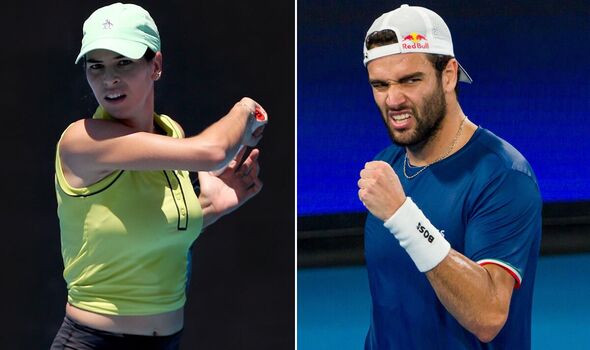 Tennis stars Matteo Berrettini and Ajla Tomljanovic opened up on their romance on tour as they shared a key storyline in a new Netflix docu-series. ‘Break Point’, made by the producers of F1’s Drive to Survive’ takes an intimate look behind the curtain in the demanding world of elite tennis.

The first five episodes of the series premiere on Friday 13 January and the show is aiming to attract new audiences to tennis and give fans a unique insight into preparations for Grand Slams and other big tournaments.

But there is also a focus on personal relationships between players and episode two offers an intimate look at the romance of Italian Berrettini and Australian star Tomljanovic. The duo were dating at the time of filming for the series but have since broken up after being together for just over two years.

Break Point showcases the contrasting fortunes of the pair at the Australian Open at Melbourne Park last year and details how their unique relationship blossomed in October 2019.

“Everything started in 2019. I texted her on Instagram,” Berettini says. “I like the fact that she was, I think she’s shy like me. We obviously understand each other, especially in sport it’s so tough when you don’t have your family, your friends around you I think it’s so important.”

World no.39 Tomljanovic also discussed the start of the relationship: “In all honesty, it wasn’t like love at first sight,” she admitted. “It was something that over time grew.

“I think we both enjoy being there for each other but that doesn’t mean that there aren’t challenges. It’s just really good when we’re both winning, let’s put it that way.”

Berrettini and Tomljanovic were seen as the power couple in tennis for a brief period, regularly practising together, cheering each other on and hanging out in between matches at tournaments. But after months of speculation, Berrettini confirmed they had split at the Queens Club Championship in June.

“Yeah, I’m single but it’s not like something that I am looking for, like, it’s not that I’m waking up and have to find love,” he said at the time. “It’s just something that is happening, it’s good for me, if it doesn’t, it’s another day, you know.”

Berrettini, who reached the semi-finals last year, has been drawn against British legend Andy Murray in a mouthwatering Australian Open first round clash. Meanwhile, Tomljanovic will face Argentine outsider Nadia Podoroska in her opening match of the tournament that begins on January 16.