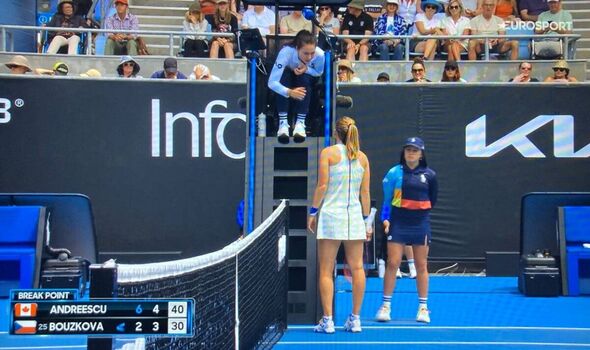 Marie Bouzkova cut a frustrated figure during her Australian Open first-round match against Bianca Andreescu and even complained to the umpire at one point for her opponent’s constant ‘screaming’. Andreescu, who has struggled to rediscover her best form since winning the 2019 US Open due to long injury lay-offs, was making just her third main draw appearance at the Australian Open.

And she got off to a fast start against Bouzkova, breaking her opponent’s serve twice to take the opening set. But things got heated in the second set as Bouzkova began to claw her way back in the match.

The set was level heading into the eighth game with Bouzkova on serve. The No 25 seed was battling to hold her serve once more with the game finely poised at 30-30.

A weak shot at the net from Bouzkova was pounced on by Andreescu at the baseline, but the Canadian clearly felt she didn’t get the best contact with her backhand. Andreescu let out a screeching scream just as the ball flew over the net with Bouzkova seemingly distracted by the yelp.

The Czech tennis star was unable to get her return back over the net, giving Andreescu a break-point opportunity. But Bouzkova was incensed as she marched over to the umpire to complain about Andreescu’s noise levels.

“I’m hitting the ball and she’s screaming,” Bouzkova could be heard complaining to the umpire. Andreescu could be heard apologising from her side of the net as Bouzkova walked back towards the baseline.

The chair umpire did not take Bouzkova’s side though as she felt the screams did not hinder the return shot. Bouzkova managed to recompose herself to save the two resulting break point opportunities in the game.

But she was unable to force a third and deciding set in the end with Andreescu finding the break of serve in the 10th game to move forward to the second round. The Canadian tennis star has never made it past the second round of the Australian Open in her career, losing to Anastasija Sevastova in 2019 and Su-wei Hsieh in 2021.

She takes on Spain’s Cristina Bucsa in the next round but could face world No 1 Iga Swiatek in the third round.