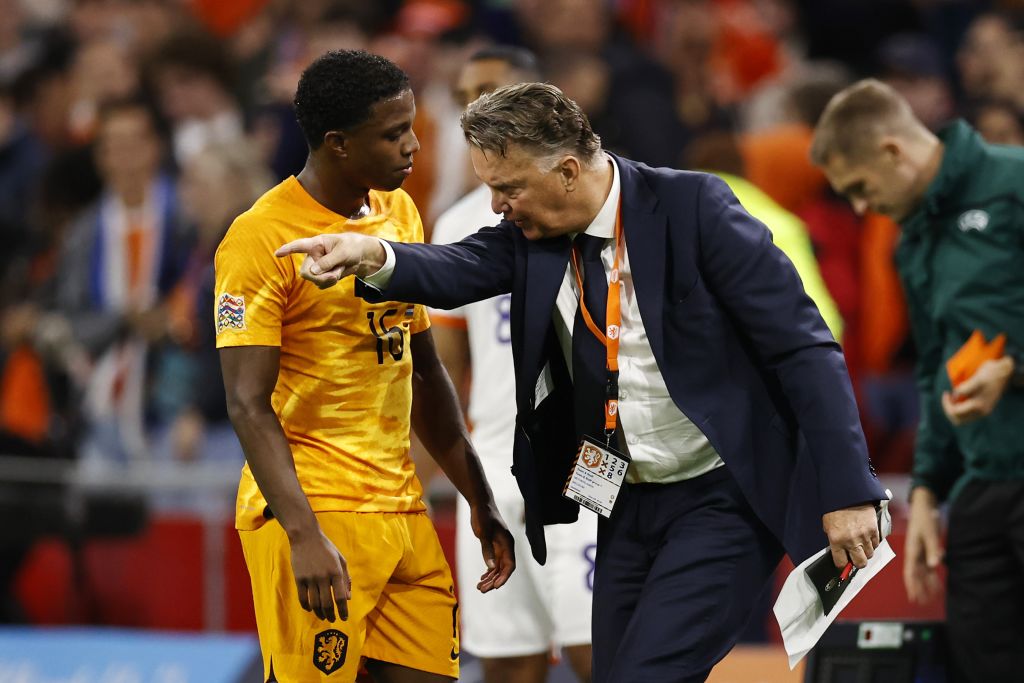 Louis van Gaal is weighing up using Manchester United defender Tyrell Malacia as a left-sided centre-back at the World Cup and trialled the 23-year-old in the role against Belgium.

The former Feyenoord full-back replaced Nathan Ake at half-time of Sunday’s 1-0 win for the Netherlands in the Nations League, with Virgil van Dijk’s commanding header securing all three points for the hosts in Amsterdam.

But rather than lining up in his usual role on the left flank when he entered the pitch, Malacia instead sat alongside Van Dijk and Jurrien Timber in the heart of the defence with Daley Blind remaining at left wing-back.

The United new boy gave a decent showing defensively despite his diminutive stature, and Van Gaal says he was keen to trial Malacia in the role after Bruno Martins Indi – Ake’s usual backup – was ruled out of the World Cup through injury.

Asked about Malacia’s rather experimental position, Van Gaal told ESPN NL after the game: ‘I put Malacia in the left centre-back role because Martins Indi is not going to make it to the World Cup squad in time due to injury.

‘I have to look at other players who can play there and I wanted to see what Malacia could do, so Ake was substituted.’

Van Gaal was happy with plenty of aspects of Malacia’s performance in his new role, particularly how he shackled Kevin De Bruyne, but seemed to feel his work on the ball could have been better – with the two even sharing a heated conversation on the touchline after one marauding run forward too many.

This time speaking to NOS, Van Gaal said: ‘I put him on the left of the central defence because De Bruyne played a lot on that side. It’s better to have a pit bull like that instead of someone like Blind who tries to solve it tactically.

‘De Bruyne has more acceleration than Blind as well so I put Malacia there. I had already discussed this with him the day before yesterday, that he could play as a left centre-back.

‘The defensive work he did very well, but the constructive work in the build-up could have been a lot better.’

Frenkie de Jong and Memphis Depay – two key players for the Netherlands – were unavailable against Belgium but Van Gaal hopes they will be fully fit for the World Cup, while he has told his squad that any players carrying injuries will not be selected.

He continued: ‘We still have so many decisions to make. We follow 60 players and of course all those players who were there today have a plus, but a plus is not enough. It is not a guarantee.

‘In fact, Frenkie de Jong and Memphis have more guarantees, because they have meant so much in qualifying and the Nations League. I hope they are fit and I did say [to the players in the dressing room] that if you are not fit you will not come. We are not a rehabilitation centre.’