Union St Gilloise 2-0 Rangers: Giovanni van Bronckhorst’s men left with it all to do to qualify for the Champions League after Teddy Teuma and Dante Vanzeir strikes seal comfortable first-leg victory over Gers

Visiting the beer capital of Belgium at least provided Rangers fans to with the means to soothe their sorrows.

A performance as flat as a day-old pint hasn’t completely ended hope of reaching the Champions League for the first time since 2010. But, my goodness, something much more potent will be required from Giovanni van Bronckhorst and his players if they are to turn the tie around at Ibrox next Tuesday evening.

Uncertain at the back and timid in attack, this had a completely different feel to the barnstorming displays that took Rangers all the way to last season’s Europa League final. Seventy-six days on from Seville, a damaging false start was produced in the bid to secure a £40 million group stage windfall. 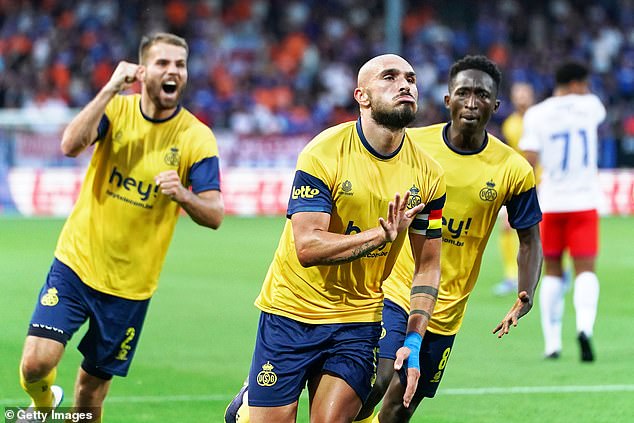 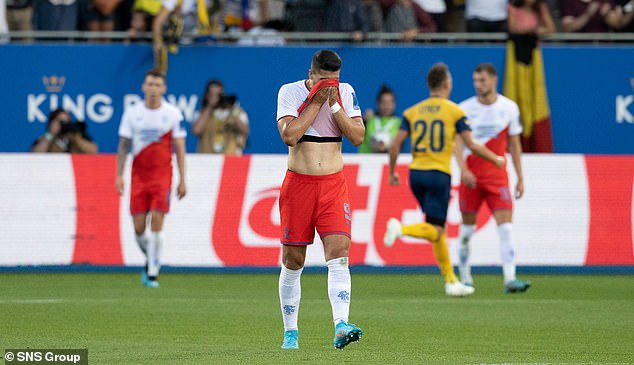 Man of the Match: TBA

True, there was ill fortune in the ridiculously harsh handball penalty awarded against Connor Goldson following a VAR check. But no-one could truly dispute Union Saint-Gilloise merited a two-goal first leg lead on the overall balance of play. The Belgians had numerous chances to inflict further pain.

Their opening goal, netted by Teddy Teuma midway through the first half, was dismal from a Rangers perspective. Weak defending preceded a weak attempt at a save by Jon McLaughlin. The goalkeeper went some way too redeeming himself with a clutch of subsequent stops as Union carved their way through time after time.

This wasn’t even a proper home match for last season’s Jupiler Pro League runners-up. Union’s Stade Joseph Marien is something of a museum piece and doesn’t need UEFA standards, hence the switch half an hour east to the UH Lueven’s Den Dreef Stadion.

Leuven is the base for numerous breweries, including a vast facility producing gallon upon gallon of Stella Artois. Reassuringly expensive was the old marketing phrase they used. And the cost of failure here could very high for Rangers in terms of letting slip a chance to grasp transformative revenue.

Yesterday’s play-off round draw confirmed the winners of this tie will meet either Monaco or PSV Eindhoven for a spot among the elite. Van Bronckhorst can’t think that far, though. Operating with a back three here simply didn’t work. A different plan, and much more punch, will have to be summoned if Ibrox is to stage another great European night next week and not a bitter disappointment to match the loss to Malmo 12 months ago.

The absences of Ryan Kent and John Souttar from the travelling meant Van Bronckhorst was certain to make changes from Saturday’s 2-1 comeback win over Livingston. In the end, there were four. And a switch of formation.

This is the first time Union have played in continual competition since the pre-UEFA accredited days of the Fairs Cup, yet the ground was maybe only three-quarters full by time of kick-off arrived on a stickily warm evening.

Coping with events on the pitch was, of course, far more significant for Rangers. In that regard, first impressions were deceptive. They actually settled quicker.

With John Lundstram and Sands flanking Goldson at the back, Van Bronckhorst’s men established an early grip of possession against rather edgy-looking hosts.

When Siebe Van der Heyden caught Antonio Colak just outside the area, the angle demanded Borna Barisic step up. He sent the free-kick spinning towards the near post, forcing Luxembourg goalkeeper Anthony Moris to punch clear.

Sands then tested Moris with a crisp, left-footed strike from distance as Union toiled to find a foothold. One was soon located, though. And from there they climbed powerfully upwards.

A first hint of danger to the visiting defence came when Loic Lapoussin’s firm hit was blocked by Lundstram. Then Lazare Amani nutmegged Barisic on a surge down the right flank before sliding over a dangerous cross that was anxiously cleared.

Firmer evasive action arrived when Sands made a brilliant challenge on Dante Vanzeir to prevent the Belgium cap netting from a Simon Adingra delivery. Lapoussin had a slid a through-ball inside Lundstram to set up the opportunity. Union were on the march.

Their breakthrough arrived in the 27th minute. Aided, it must be said, by some distinctly flimsy resistance inside the Rangers area.

Ryan Jack lost a battle of wills against rival No 8 Amani, with Barisic then unable to do enough to prevent the ball being laid into the path of Teuma. His strike took a nick off the heel of Goldson but still seemed to beat McLaughlin a little too easily. Shoddy stuff all round.

Just as at Livingston, Rangers were behind to a poor concession. And, once again, there was no appreciable response prior to the interval.

That might have been different had Colak not lost his bearings. Tillman’s cross towards him was good but the Croatian failed to make any contact with his head. A glaring opportunity was lost.

Union very nearly exacted severe punishment. Not for the first time, the Belgians were able to exploit Barisic’s area and tee up a chance. Lapoussin would have made it 2-0 but for a terrific challenge by Tavernier. The Rangers captain looked accusingly to his left as another mini-inquest kicked off.

Staid when advancing, the Premiership runners-up were rattled in retreat. That impression was confirmed when Sands collected a booking for clattering Amani near the halfway line.

Van Bronckhorst resisted any substitutions at the interval. And the flow of the match remained firmly towards McLaughlin.

Lapoussin headed over from Bart Nieuwkoop’s cross before the Dutch full-back clipped the outside of the post from Amani’s cutback.

On 67 minutes, the Ibrox boss turned to the introduction of £9 million worth of summer business. On came Ridvan Yilmaz and Ben Davies, off went Barisic and Jack. Lundstram stepped forward into midfield.

It didn’t make enough of a difference. McLaughlin denied Lapoussin at the near post and parried a follow-up from Vanzeir. When Teuma’s drive then came off Goldson, it led to a lengthy VAR consideration by Bosnian referee Irfan Peljto.

Given that the ball had taken a little deflection before striking Goldson’s arm at point-blank range, the award of a penalty seemed nonsensical. But Peljto had made up his mind. And Vanzeir coolly sent McLaughlin the wrong way from the spot.

The Ibrox goalkeeper then saved from the same player as he broke away looking for a third. If Rangers are going to get out of this mess, that might yet prove a critical moment.