An emotional Greg Hire says the referees “obviously swallowed their whistles” in the crunch moments of their heartbreaking overtime loss to England in the final of the men’s 3 x 3 basketball.

In one of the most dramatic finishes in the history of the sport, Birmingham local Myles Hesson drained a two-point shot from the perimeter to secure the gold medal with a 17-16 victory. 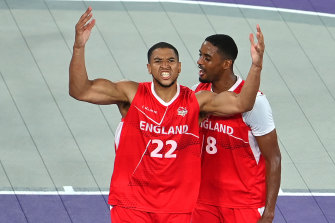 The partisan crowd erupted, jumping to their feet as the crestfallen Australians fell to the court.

They had gone oh-so close to victory. Seconds before Hesson’s winning basket, a shot from Australia’s Daniel Johnson that would have won the match had lipped out.

Afterwards, Hire could barely contain his disappointment, crying in the arms of an Australian team official.

He was gracious in defeat, but he could barely hide his disappointment in the referees allowing the match to descend into a street fight. 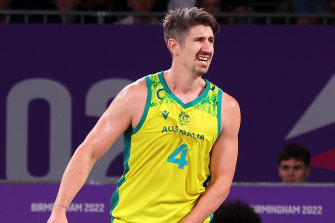 Greg Hire was gracious in defeat but couldn’t hide his disappointment after the overtime loss.Credit:Getty

“That’s the reason why we love it right?” Hire, who also struggled with a groin injury, said. “It’s not traditional five-on-five. It is tough. Obviously, the refs swallowed their whistle towards the end of the game, which is a shame. But that’s the game. That’s why it’s a sport that everyone loves.”

Australia led 9-7 with four minutes to go, but the match seemingly slipped from their grasp when Hire committed a double foul after back-chatting referee Chee Khun Liu.

That pushed Australia to 10 team fouls and under 3 x 3 rules any infringement from then on meant England went to the free throw line for two shots and possession.

England ramped up their physical approach, with Orlan “OJ” Jackman particularly dubious in defence but somehow allowed to get away with it.

The sides traded baskets with England hitting the lead when Jayden Henry-McCalla nailed a two point shot, only for Johnson to score one point with seconds remaining.

The match went into overtime in which the first team to score two points won.

Despite the loss, the match was another reminder of why this shortened format of the game has become so popular since making its debut in Tokyo last year.

Australia, though, face an uphill battle to qualify for the 2024 Olympics in Paris. 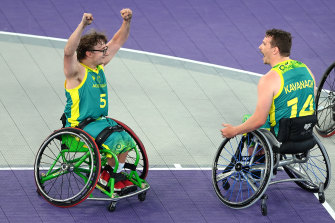 “Ranking points [are how we qualify] but unfortunately it’s tough for us,” Hire said. “Most of our guys are playing professional – when you’re playing in that, the pro circuit, they don’t have time to travel around the world. We don’t get paid to play 3 x 3, we don’t get per diems like the Boomers, you’re doing it for the love of the game and your country. Realistically it will be tough for us. We have to go through World Cup qualifications. It will be tough, but we know Aussies like to battle. We’ll put ourselves in a position to pull through.

Earlier, the men’s wheelchair team got the party started for Australia, beating Canada 11-9.

The match went right down to the final second with Canada’s Colin Higgins’ two-point attempt from outside the perimeter lipping out.

“Never in doubt,” insisted Australia’s Lachlin Dalton, who scored one from five from the arc, earning him the nickname of “Kingslayer” from the in-court commentator.

The tables were turned, however, in the women’s wheelchair fixture with Canada trouncing Australia 14-5.

Get all the latest news from the Birmingham Commonwealth Games here. We’ll be live blogging the action from 4pm-10am daily.