Tottenham next manager: Brendan Rodgers told Spurs would be ‘sideways move’ from Leicester

What next for Brendan Rodgers after FA Cup win?

Brendan Rodgers should not consider leaving Leicester City for Tottenham this summer, because the Foxes are “a far better football club in many ways”. That is the opinion of former Crystal Palace owner Simon Jordan, who believes that the grass would not be any greener in north London for Rodgers.

The former Liverpool and Celtic manager has been strongly linked with the Spurs job ever since Jose Mourinho was sacked on April 19.

He has distanced himself from the speculation by saying he is “very, very happy” at Leicester, where he has a “really strong relationship with the board” but the rumours persist.

The 50-year-old led the Foxes to FA Cup glory on Saturday thanks to a 1-0 win over Chelsea at Wembley and is now focused on playing the Blues once more in the Premier League on Tuesday in the race for a top four finish.

Spurs chairman Daniel Levy has stepped up his search for Mourinho’s successor recently and Rodgers is one of a few names in the frame to take over from interim boss Ryan Mason this summer.

Brighton boss Graham Potter has also been linked with the vacancy, but Jordan thinks that the Spurs job isn’t attractive enough for Rodgers to walk away from Leicester this summer. 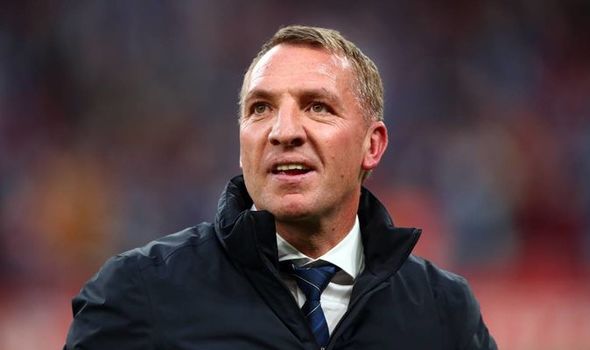 “Tottenham is not an upward move for him. It’s a sideways move, to some extent,” he told talkSPORT.

“If you embrace all the ingredients that Tottenham Hotspur should be, it would be an upwards move, but that’s should be, would be, and could be.

“The reality of it is Leicester is a far better football club in many ways. I said this earlier on in the season, Leicester are a brilliant football club and are a better team than Man United, everyone went up in arms at the fact I made that observation and they proceeded to beat United in the cup semi-final.

“Brendan has got the football nous to know when to stick and know when to twist and Tottenham is not a big enough job to potentially jump from Leicester to Tottenham, especially when you have to work with Daniel and work under Daniel’s regime.

Arsenal urged to not re-sign former stars amid transfer links

“Leicester have done something Tottenham haven’t done for 13 years, that’s win a cup.”

Leicester are third, three points ahead of Liverpool, with two Premier League matches remaining against Chelsea and Tottenham.

While Rodgers has insisted he is concentrating on the end of the season with Leicester, he did pay Spurs a complement earlier this month.

He said: “Tottenham is a great club, one of the biggest clubs in Britain but for me, I’m just in a really, really happy place in my life.”