Kieran Tierney could not hide his shock after an opponent somehow avoided a yellow card for tearing off part of his shirt on Thursday night.

The Arsenal left back scored the only goal as his side beat FC Zurich 1-0 in their final Europa League group game, securing them top spot in Group A and a more favourable draw for the knockout stages.

But the Scot was left stunned as Zurich right back Nikola Boranijasevic escaped a booking despite ripping a huge chunk out of his shirt as he pulled Tierney back. 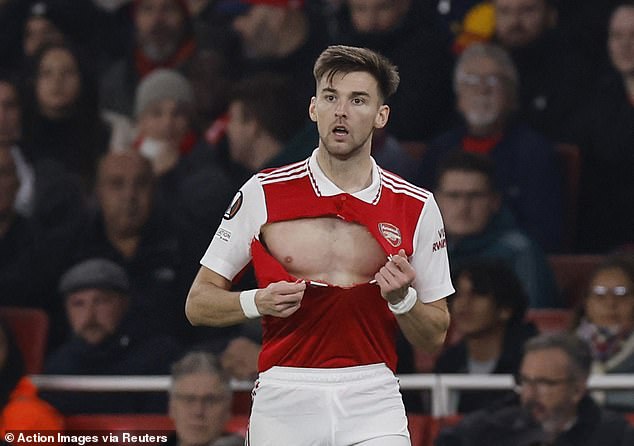 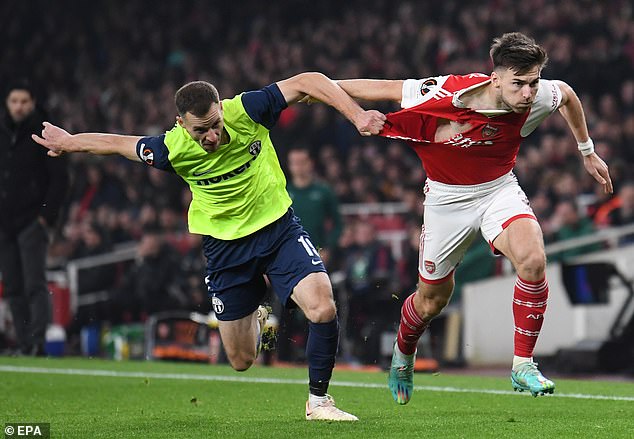 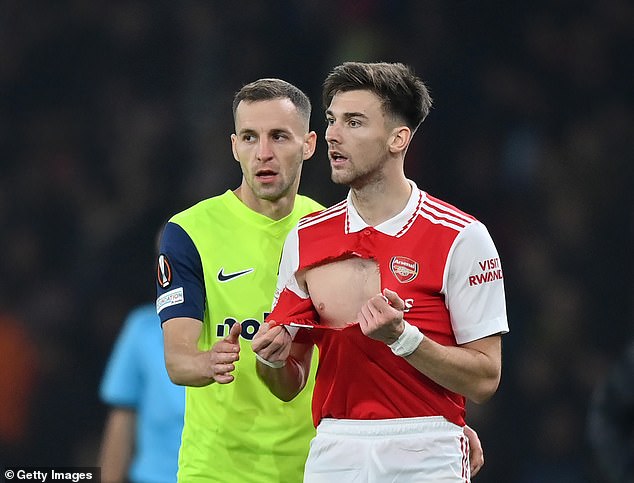 Tierney, 25, knocked the ball past Boranijasevic and looked to be past his opposite man but the 30-year-old Serb grappled with him before pulling him back using his Gunners jersey, with a sizeable hole visible after their tussle.

But referee Eric Lambrechts did not see fit to give out a booking despite the 34-cap international’s evidence of the foul.

And fans quickly flocked to social media to blast the referee’s decision and joke about the incident.

One said: ‘Tierney’s shirt ripped to pieces yet no booking for shirt holding for the opposition. Makes zero sense.’

A second added: ‘The ref is absolutely stupid. His first job is to protect the players physical integrity. Jesus received knocks, Tierney has his shirt ripped off. No booking. You bet Zurich will keep going. #UEL’

Another posted: ‘Surely quite literally ripping a shirt off a player is enough for a free kick?? No wonder Tierney looks annoyed…’

Other supporters took a more light-hearted view of the incident, with one referencing the Scottish defender’s recent injury problems by joking he would now be ‘out for six months’

Several others took a more light-hearted view of the incident, with one tweeting: ‘Tierney was so good tonight they had to rip his shirt.’

A fifth said: ‘You might rip Kieran Tierney’s shirt but best believe that bad boy isn’t coming untucked,’ followed by a cry-laughing emoji.

Another simply added: ‘Bro Tierney is balling out so hard that they ripped his shirt,’ with one referencing his recent injury problems, saying: ‘Tierney got his shirt ripped? That’s him out for 6 months ffs.’