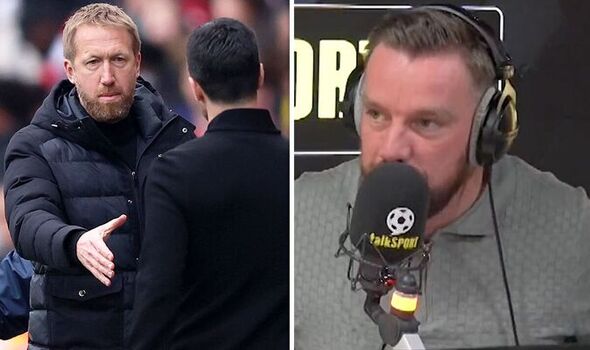 Former Tottenham midfielder Jamie O’Hara claims Thiago Silva is the only fit Chelsea player who would get into Arsenal’s current starting XI. The Gunners head to Chelsea on Sunday and O’Hara has made it clear who he thinks are the favourites.

Arsenal are top of the Premier League table, two points clear of reigning champions Manchester City. They know they have to win their final two matches before the World Cup to ensure they remain top at Christmas.

Chelsea are sixth following last Saturday’s shock 4-1 loss at Brighton. Graham Potter is set to be without several key players this weekend, including full-back duo Reece James and Ben Chilwell.

O’Hara says James would make his combined XI if fit but says Silva is the only available player who would get into the Arsenal side, in place of Gabriel. Explaining his decisions, O’Hara told talkSPORT: “You can’t say [Kai] Havertz because for me [Gabriel] Jesus is way better.

“Out of Mason Mount and Gabriel Martinelli, at the moment I’m taking Martinelli, Bukayo Saka over Raheem Sterling. Martin Odegaard, who gets in ahead of him? He’s fantastic.

“Cesar Azpilicueta has been a fantastic player over the years but I think Ben White is ahead of him right now. Everyone’s talking about Chelsea, who have spent a lot of money, £275million.

“They should be challenging for the title. I look at Arsenal’s team and it’s a better side. Arsenal have got to take great confidence going into the weekend.”

The loss at Brighton was Chelsea’s first in all competitions since Potter’s appointment. They are yet to lose at home under the 47-year-old.

However, former Arsenal winger Jermaine Pennant does not think Stamford Bridge is as tough a place to go as it once was. Pennant doubts whether his old side will fear the trip to their London rivals.

He said: “I don’t think Stamford Bridge is as tough as it once was. I’d have loved to have played there now.

“There’s no Ashley Cole charging me down and putting me in Row Z for starters! I don’t think it’s as scary a place as it once was.

“With the players that are in the team now you don’t go there thinking ‘Ohhh, I fear him. This is going to be a tough game.’ It was a horrible place to go to.”