Sam Kerr celebrates after scoring a late leveller for Chelsea

It was in the movement, the header, all the way through to the right hand that went up to her ear as Sam Kerr celebrated in front of the Arsenal fans at the Emirates. No one does big moments like the Chelsea striker, even in a match where she had been kept subdued by the Arsenal’s defence and Leah Williamson. But Kerr knew she would get a chance, and Chelsea did too. Her 89th-minute goal kept Chelsea ahead in the title race, but only just.

Kerr’s dramatic equaliser was her 48th goal in the Women’s Super League in just 57 appearances but the value she brings to Chelsea is as much to do with the timing of her most important contributions. “What she has, no one else has,” said Emma Hayes. “The standout attribute is she doesn’t lose focus. She stays confident in the game and knows it only takes one chance.”

It rescued Chelsea, after Arsenal had dominated the meeting of the WSL’s top two in their opening match of the year. In front of over 45,000 at the Emirates, Arsenal outnumbered Chelsea in midfield and had created enough chances from open play to win the game, even without Kim Little’s controversial second-half penalty. “We were outmuscled,” Hayes admitted. “For us to come here and not be at our best, I think it’s an amazing point.”

Kerr produced the finishing touch but the game also changed with the Chelsea substitutions that followed Arsenal’s opener. Jelena Cankovic, signed in August, produced her most important moment in a Chelsea shirt yet with an outstanding cross that beat Williamson and set up Kerr at the back post. The introduction of Fran Kirby and a switch of formation also helped Chelsea gain a foothold after Arsenal took the lead. Neither substitute was meant to play; Cankovic had been ill this week while Kirby picked up a knock in training.

It’s what Chelsea do. They are resilient and get through games when they are not at their best. You can never rule them out, even when their attack is not clicking, and it underlines the size of the task facing Arsenal to dethrone the WSL champions. This was a chance for them and victory would have moved Jonas Eidevall’s side level at the top with a game in hand. In front of their own fans, Arsenal had rattled Chelsea early on with their press and if they had been more decisive in the final third, Kerr’s one moment may not have counted for anything.

Arsenal’s problem, though, was they could not finish Chelsea off. There was a clear lack of conviction in some of their finishing. The Chelsea goalkeeper Zecira Musovic made a number of saves but was rarely stretched, apart from Steph Catley’s drifting cross that clipped the bar. It’s why there was such relief when Little converted her penalty, fortuitously awarded after Niamh Charles barged into Caitlin Foord outside of the box. It may have taken the pressure off and given Arsenal more confidence in front of goal, but they lacked authority in the key moments after taking the lead.

It’s clear that they have been left short by Beth Mead and Vivianne Miedema’s injuries, with the forwards combining to score the majority of their goals last season. In their absence, Stina Blackstenius showed flashes when dropping off but did not create too many problems in the penalty area. Lina Hurtig and Foord, coming in from the wings, had more chances but lacked a clinical edge. Little, Lia Walti and Frida Maanum controlled the midfield, an area Arsenal have strengthened already in the transfer market this month, but Chelsea have also shown how insignificant that can sometimes be when you have a world class striker such as Kerr. 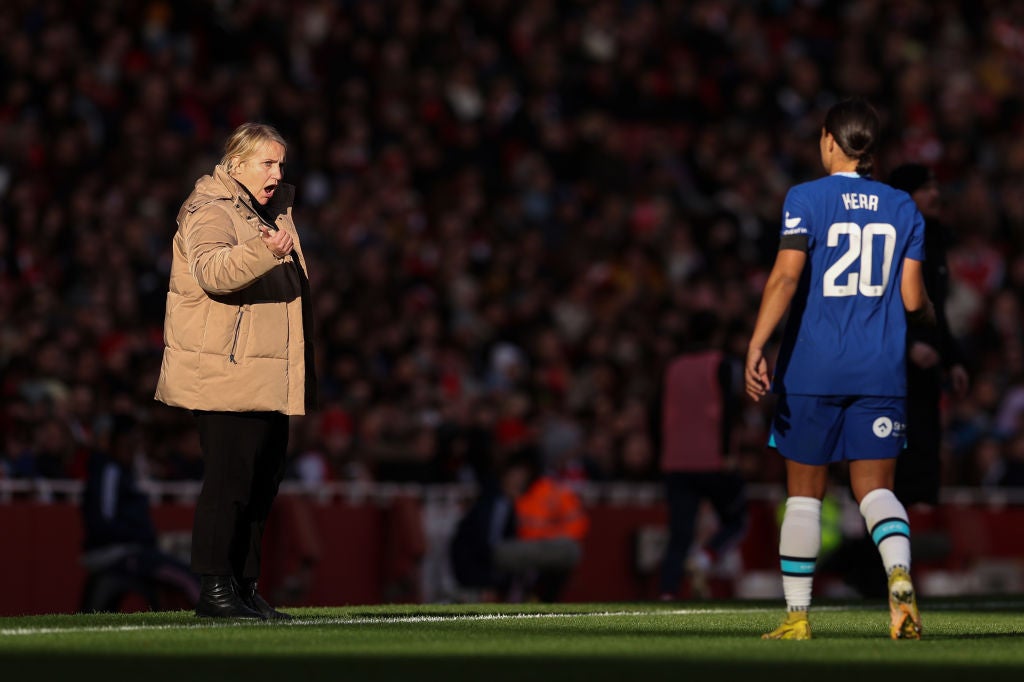 Eidevall still looked to take positives from his side’s performance after they had dominated Chelsea. “I thought we were the better team,” he said. “I think we created more chances than Chesea did. Over the whole game I’m happy with the performance but therefore I’m obviously disappointed with the result.” He added: “We know it’s a league with small margins, we know we have to be decisive.”

“The good news for you is you can sell some more papers,” Hayes said. “We can keep the conversation going to the end and the title can go to the last day, like it always does. It’s a win-win for all of us. Coming here today I knew this was their best opportunity. It’s a great point for us, but that’s all it is at this stage.” But with Kerr and the difference she can make, it means Chelsea also remain favourites.