The last time Ibrox had the opportunity to hum along to the pre-match strains of Zadoc the Priest was 2010. Unless Rangers learn to defend corners quickly it could be some time before the Champions League anthem rings around the old arena again.

To concede one goal from a Cody Gakpo set-piece was human. After turning the game on its head with the help of PSV’s blundering keeper Walter Benitez, the concession of a late second from a corner kick left hopes of a lucrative place in the group stage hanging by a thread.

The last time PSV boss Ruud Van Nistelrooy played at Ibrox his penalty kick failed to prevent a 4-1 thrashing in a group game in 1999. Watched from the stand by Sir Alex Ferguson, his former boss at Manchester United, the Dutch icon could take more satisfaction from this trip to Glasgow. 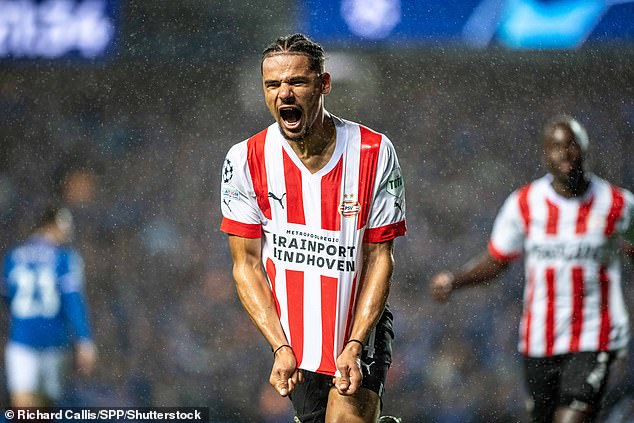 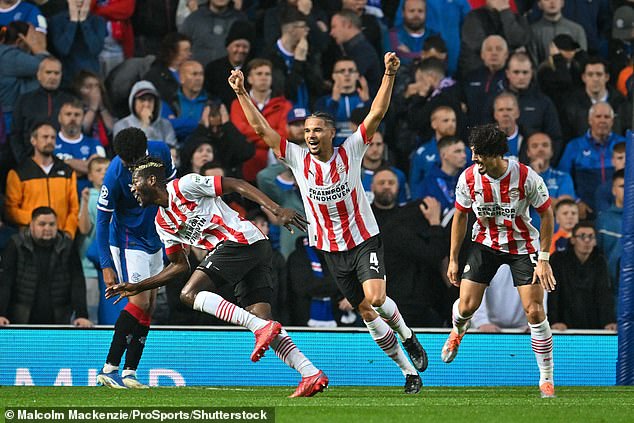 This tie isn’t done yet. Yet Rangers were always concerned by a trip to Eindhoven in the second leg. And the failure to eke out a first leg lead makes a repeat of last season’s heroics in Dortmund more of a necessity than it should have been.

Linked with Manchester United the winger Gakpo lies at the heart of most of what PSV do. The winger’s corner after 37 minutes caused chaos, Connor Goldson’s defensive header bouncing against the boot of James Tavernier before PSV defender Andre Ramalho rolled it into the path of teammate Ibrahim Sangare. The finish was deadly.

Rangers responded with venom, drawing level inside three minutes. While Antonio Colak might not bring others into the play like Alfredo Morelos, his finishing shows every sign of being just as lethal.

A quite brilliant equaliser came from the vision of Steve Davis, the veteran justifying his unexpected inclusion with a cutting first time pass to set Tavernier free on the right. The skipper’s low ball picked out Colak on the penalty spot the Croatian stroked it beyond the despairing dive of Walter Benitez for his fourth goal in four games. But for a dubious offside call at Livingston he’d be on five from five. 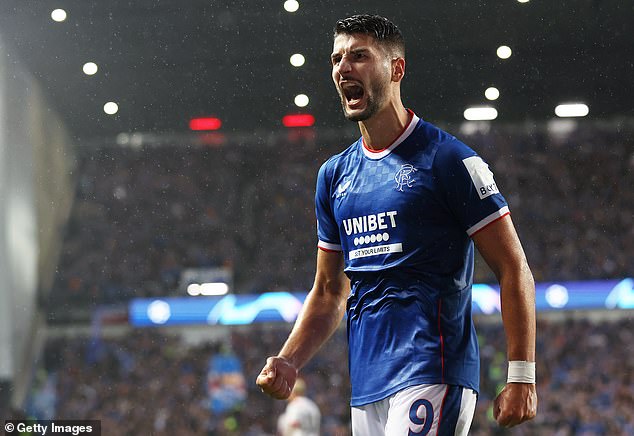 PSV were a clear step up from Union Saint Gilloise, the Belgian team dismissed in the third qualifying round. A big, physical team they carried menace every time they strolled over the halfway line.

Stroking the ball around the sodden surface with confidence the visitors looked the more likely team to score a second until their Argentine keeper Benitez fumbled a long range free-kick from Tom Lawrence into his own net in hapless fashion with 20 minutes.

It seemed as if Rangers just might have an advantage to cling to until another Gakpo corner was thumped into the net by the head of Armando Obispo with 12 minutes to play.

PSV ended the game the way they started it; as the more threatening team.

There was an early warning of their menace when an unimpeded cross from Ismael Saibari – a real handful – found its way all the way through to Luuk de Jong. Back in Eindhoven after spells with Sevilla and Barcelona the striker volleyed inches over the bar. In the opening 20 minutes or so the passing of PSV provided grounds for concern. Gradually, Rangers gave the supporters something to shout about.

There was rare shaft of light after 22 minutes when Davis teed up a shooting chance for Malik Tillman 18 yards from goal. A straight effort didn’t really test keeper Benitez as it should have – especially given his antics later in the game – but the home team were beginning to gain a foothold in the game. Their best spell of the 90 minutes came before half-time.

Despite an unsuccessful scream for a penalty for handball against defender Jordan Teze Rangers seemed to be growing into the game when they shot themselves in the foot from a corner for the first time in the game. Regrettably it wouldn’t be the last.

For Rangers was a 23rd meeting with Dutch opposition in Europe. The Glasgow team had won nine, lost nine and drawn four. A fifth draw came after an engrossing, see saw second half when PSV looked a very tidy outfit and the teams gifted each other goals with comic cut defending. Watching them trade blows was terrific entertainment.

The goalscorer Colak so nearly scored his second seven minutes after the restart. A raking long crossfield ball from James Sands picked out Tavernier. An attacking pest for the visitors, the right-back’s intelligent pass was thumped goalward by the goalscorer. The angle was tight, the keeper had to save it, and he did. This time.

There was a quick reminder of just how finely poised – how engrossing – a contest this was within two minutes. Ismael Saibari will probably feel he did the hard bit when he plucked de Jong’s knockdown out of the air and cut inside brilliantly to create a shooting chance. When he prodded the ball inches wide Ibrox held its breath.

Some teams travel to Ibrox and shut up shop. No one would level that accusation at the Erevidisie runners-up. A Moroccan international Saibari, in particular, never let up. Before the hour he swept a decent chance over the crossbar. Minutes late Jon McLaughlin clutched on to a firmly struck low shot from the same player.

Pinned back for spells of the second half Rangers needed a break to turn the game in their favour and, goodness knows, they got one. Benitez must have wished he could bury his head in the Glasgow turf after,

With 20 minutes to play a free kick 30 yards from goal didn’t look especially promising. Taking an old school approach Tom Lawrence stepped up and hit it as hard as he could. The ball took a vicious bounce on the sodden Glasgow turf, but that fails to explain an absolute howler from the PSV keeper. He allowed a meat and drink save to squirm from his grasp and spin a foot over the line. For the first time in the game Rangers had the lead.

This was game when it felt dangerous to take anything for granted. And so it proved.

Just as Rangers drew level within three minutes, so PSV secured parity inside eight. Once again the achilles heel of corner kicks cost Giovanni Van Bronckhurst and his players.

For the second time in the game Gakpo’s set piece into a congested area caused panic stations. Central defender Obispo leapt higher than Connor Goldson attacking the ball with aggression to bullet a header into the roof of the net.

In contrast with his opposite number Jon McLaughlin did his jo in goal for Rangers. A wonderful through ball forced the keeper to race from his line to deny the German full-back Max a shot at goal. The suspicion is that another busy night lies in wait for the Rangers number one at the Phillips Stadium next Wednesday night.