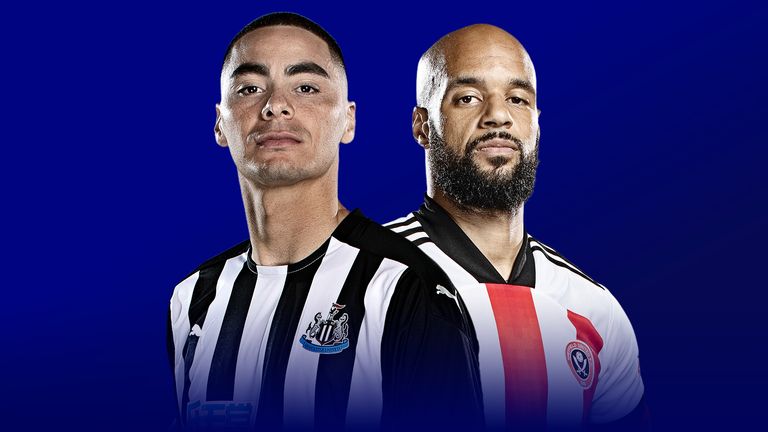 Team news, stats and prediction ahead of Newcastle vs Sheff Utd in the Premier League on Wednesday, live on Sky Sports (kick-off 6pm).

Midfielder Elliot Anderson could return to the squad after shaking off a hip problem, but defender Fabian Schar will be missing once again as he serves the final game of his three-match ban.

Striker Callum Wilson’s season has been ended by a hamstring injury and he joins keeper Karl Darlow and midfielder Isaac Hayden (both knee), skipper Jamaal Lascelles (foot) and winger Ryan Fraser (groin) on the sidelines.

Sheffield United striker Daniel Jebbison, 17, could be set for his second Premier League start after scoring on his full debut.

With no improvement in the injury list, caretaker manager Paul Heckingbottom is choosing from the same squad which beat Everton at Goodison Park on Sunday, which most likely means the teenager will be rewarded for scoring the winner.

Newcastle vs Sheff Utd will be shown live on Sky Sports Premier Arena and Mix from 5pm; kick-off 6pm. Sky Sports customers can watch in-game clips in the live match blog on the Sky Sports website and app. Highlights will also be published on the Sky Sports digital platforms and the Sky Sports Football YouTube channel shortly after the final whistle.

These end-of-season matches in front of a crowd are made for players like Allan Saint-Maximin. One of life’s true entertainers. I’m expecting him to put on a show with the paying public back at St James’ Park against the Blades, who remember, are still the league’s worst team despite their well-deserved victory at Everton. The flying Frenchman has showcased a liking for tormenting Sheffield United, scoring in both of his meetings with them.

Surprisingly, that covers a third of his entire Premier League goal return in the top flight for the Toon. He’s only scored six times. A statistic he will be looking to beef up. Starting here.

Newcastle have won five of their last six league games against Sheffield United, though they did lose the reverse fixture in January this season, giving the Blades their first win of the campaign.

Sheffield United are looking to complete their first league double over Newcastle since 1978-79 in the second tier, while they last beat them twice in the same top-flight campaign in 1971-72.

Newcastle have lost their final home league game in each of the last two seasons, having won five in a row beforehand. They last lost more such games consecutively with a run of three between 2006-07 and 2008-09.

Sheffield United beat Everton 2-0 in their final away game of the first Premier League season in 1992-93 – since then, they have lost their last away game in each of their three top-flight campaigns, conceding exactly three goals each time.

Newcastle have won just one of their last 24 Premier League games played on a Wednesday (D5 L18), winning 4-1 at Bournemouth in July 2020.

Sheffield United have won each of their last three Premier League games played on Wednesdays, including both such matches played this season (2-1 vs Manchester United, 1-0 vs Aston Villa).

Newcastle’s Allan Saint-Maximin has scored in both of his Premier League appearances against Sheffield United. The Blades are one of just two clubs he’s scored more than once against in the competition, along with Burnley.

Joe Willock has scored in each of his last five Premier League appearances. Only two Newcastle players have ever scored in six consecutive games in the competition – Papiss Cisse in April 2012 (6) and Alan Shearer in November 1996 (7).

Newcastle’s Joe Willock has scored in each of his last five Premier League games – a goal here will see him become the youngest player to score in six consecutive appearances in Premier League history (21y 272d).