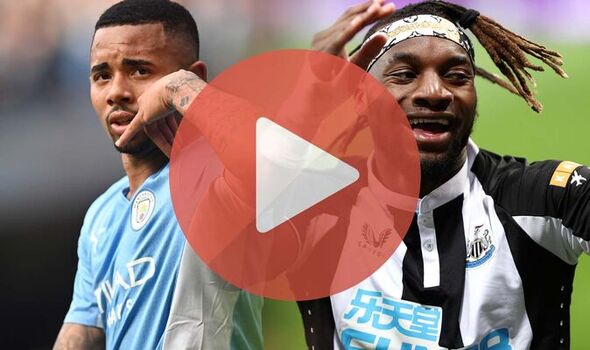 Manchester City are taking on Newcastle in the Premier League this afternoon. Sky Sports will be broadcasting the big game from the Etihad live, with coverage starting at 4pm ahead of kick-off at 4.30pm. If you want to tune in you can find the best Sky Sports deals below.

Sky is offering its award-winning Sky Q set-top box with access to its exclusive channels, including Sky Atlantic, as well as a complete Netflix subscription and ALL of its Sky Sports channels for £46 a month. That deal price will last for the full 18 months

Manchester City go into this game with just the Premier League title as their last chance of silverware this season after a dramatic loss to Real Madrid in the Champions League semi-final midweek.

Speaking after the stunning loss at the Bernabeu – which saw Manchester City set to go through to the Champions League final until a remarkable turnaround in the 90th minute – City boss Guardiola was extremely candid about how he was feeling about his side’s European fortunes.

Discussing whether he could lead his team to Champions League glory, Guardiola said: “Maybe I’m not good enough to help the team to do it.

“Nobody knows what would have happened with other players or managers. We were close – they know it, we know it – but what is important is we are going to try again next season, and then again.”

Sky is offering its award-winning Sky Q set-top box with access to its exclusive channels, including Sky Atlantic, as well as a complete Netflix subscription and ALL of its Sky Sports channels for £46 a month. That deal price will last for the full 18 months

HOW TO WATCH MANCHESTER CITY VS NEWCASTLE

You can tune in and watch coverage of Manchester City vs Newcastle on Sky Sports Premier League and Sky Sports Main Event from 4pm, with kick-off at 4.30pm.

If you’ve got Sky Glass or Sky Q then a Sky Sports membership will usually cost £32 a month. But Sky is currently running a deal that drops that price to £20 a month. This can be paired with the standard Sky TV bundle, which unlocks access to exclusive channels like Sky Atlantic, as well as Comedy Central, MTV, and more, coupled with a Netflix subscription.

If you’re not home, everything from Sky Sports is also beamed to tablets and smartphones via the Sky Go app, which is available for both Android and iOS devices. You can also sign in to Sky Go on an Xbox or PlayStation to watch in another room if someone else is using the Sky Q box.

Sky-owned NOW, formerly NOW TV, offers limited-time access to Sky Sports. One month usually costs £33.99, but for a limited time only this price has dropped to £20 a month (but you’ll need to sign up for nine months). While a single 24-hour period of Sky Sports will cost a one-off payment of £11.98 with NOW.

Unfortunately, if you’re outside of the UK right now, your Sky Go and NOW subscriptions might not work as you’d expect. Sky – just like Netflix, BBC iPlayer, Prime Video and a number of other services – places restrictions based on your current location, which is determined by the IP address that your device was assigned when you connected to the internet. It’s possible to bypass these geo-restrictions by employing a Virtual Private Network, or VPN, service. You can find some of the best options below…

Surfshark describes itself as the ‘leading VPN for an honest price’. And right now it lives up to that name with a brilliant money-saving deal offers access to Surfshark from just £1.59 a month. This is for 24 months worth of VPN access, which offers a huge 82% saving on the regular price. You’ll also get two months access entirely for free

NordVPN boasts that it’s the best VPN for those wanting peace of mind when surfing the web. This service provides a secure and fully encrypted tunnel for all your web traffic and also are keeps browsing history private. For a limited time, those signing up can get 52% off the usual price with things starting from just £2.89 per month

Express VPN – Get Half Price

ExpressVPN is one of the most popular VPNs on the market – and for good reason. This brilliant service offers a fast and secure way to mask your activity on the web, keeping your personal details hidden from view (even from your internet supplier!). There’s also 24-hour customer support and a 30-day money-back guarantee if you’re not happy. Like all VPNs, you’ll be able to change your location with the tap of a button to unlock shows on streaming services that aren’t available in your country