‘How has he not been sent off?’: Liverpool fans fume at VAR once again as Diogo Jota is brutally elbowed in the face by Federico Fernandez… only for the Newcastle defender to be given just a yellow card

Liverpool fans were left frustrated at VAR after Federico Fernandez escaped with only a yellow card after an elbow to the face of Diogo Jota.

The defender led with his arm as he went up for a header, and although the BT commentators suggested VAR had taken a look at the incident, it was deemed no red card was necessary.

Fans on Twitter were less convinced however, and were left confused as to how Fernandez had managed to stay on the pitch. 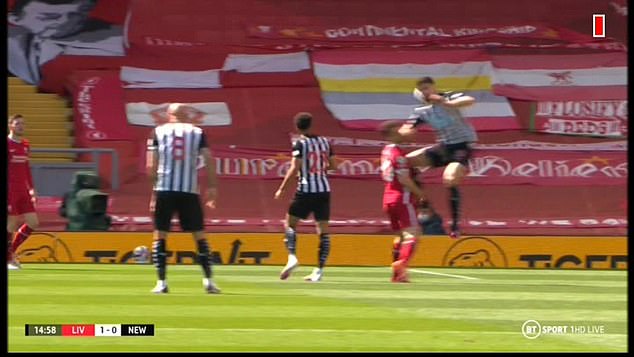 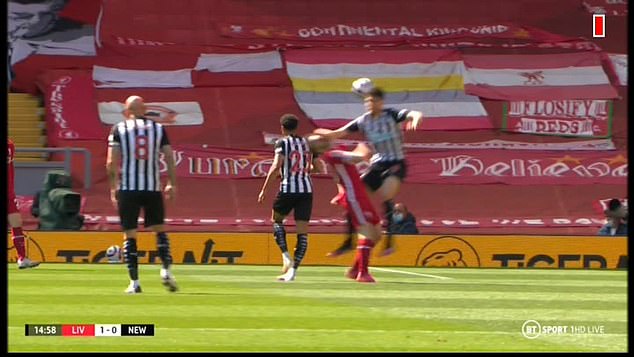 @Jimmy_McFoz tweeted: ‘Fernandez very lucky to escape any sort of punishment there for that forearm on Jota but yet again, what is the point of VAR if not to catch things like that.’

‘That should have been a red card for that elbow on Jota,’ @steph_983 commented.

‘Mariner does not see foul on Jota. If only we had a sophisticated video assistant system to check these things,’ another fan posted.

@Pbathurst commented: ‘Not sure how Federico Fernandez didn’t see a red card for that on Jota, probs cause our refs are shocking.’

Another fan posted: ‘How have VAR missed that blatant elbow into Jota’s face.’

And @ZamaanMagician questioned:  ‘HOW THE [email protected] VAR NOT REVIEWING THAT?????? ITS EXACTLY THE SAME AS THE PICKFORD ISSUE JUST BECAUSE THE OFFSIDE WAS CALLED HES ALLOWED TO HIT JOTA IN THE FACE?’

Speaking at half-time, Peter Crouch suggested Fernandez knew exactly what he was doing when asked if the defender was lucky to still be on the pitch.

‘Yeah, I believe so. Fernandez with the flailing arm on Jota, Jota turns into it,’ Crouch said.

‘There’s no need for that arm to be as low as it is and catch him in the face. Listen, I know a thing or two about a flailing arm, don’t get me wrong, and I believe he’s tried to do him there.’

While they may have felt aggrieved that Fernandez escaped more serious punishment, Liverpool would have been relieved to put a chaotic period off the pitch behind them with the perfect start at Anfield.

Mo Salah put the hosts in front after just three minutes, at the end of the week that has seen almost universal criticism aimed towards those involved in the European Super League plans, leading to Liverpool’s owner John W Henry putting out an apology video. 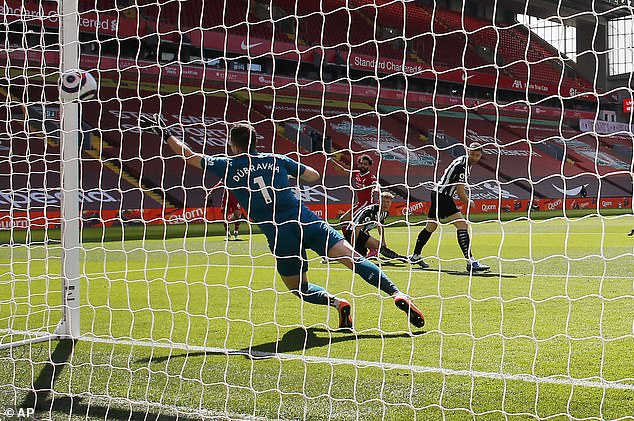