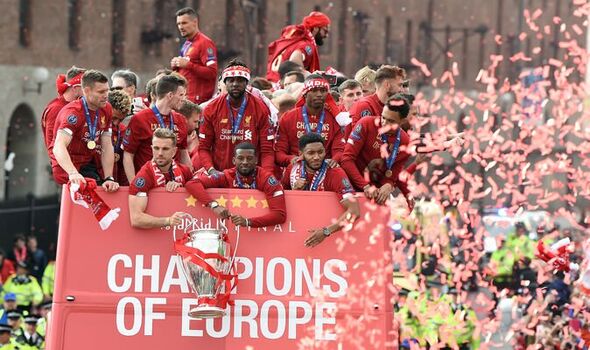 Liverpool have confirmed that they will hold a bus parade the day after they play in the Champions League final even if they lose their showdown clash with Real Madrid. The Reds have enjoyed an incredibly successful season and could still complete a quadruple before the 2021-22 season closes.

Jurgen Klopp’s side followed up February’s Carabao Cup success to lift the FA Cup last weekend. They defeated Chelsea in penalty shootouts to win both trophies.

Liverpool can still win the Premier League on the final day of the season but must rely on Manchester City dropping points against Aston Villa. The Reds must also defeat Wolves to harbour any hopes of regaining the top-flight title.

They will then take on Madrid for the Champions League final in Paris on May 28. By the Sunday morning, Liverpool could have won four trophies this term.

And the team will celebrate their success on an open top bus parade even if they fall to defeat against the La Liga outfit. Liverpool mayor Joanne Anderson had already invited the team to take part in a celebration around the city prior to last Saturday’s FA Cup success, and that has now been accepted by the club.

Liverpool’s women’s team, who won the FA Women’s Championship, will also be serenaded by supporters. They will follow in another bus.

The parade will begin at 4PM on Sunday, 29 May, and will follow a 13.5km route around Liverpool. It will give fans a chance to congratulate Klopp and his players’ successes this season, even if they do not win the Premier League or the Champions League.

Head coach Klopp has already warned Man City counterpart Pep Guardiola that the title race is not yet concluded. Liverpool are a point behind their rivals heading into the final day, and the league leaders face a tricky visit to Reds legend Steven Gerrard’s Villa.

“If I was in the other situation, then I don’t feel like I am champion already, that is how it is. From my point of view, in second, you are thinking that of course City will win that game. But it is football,” Klopp said.

“We have to first win our game. It is not like we are talking about Wolves like they are not there. It is possible, not likely but possible. That is enough.”