Jurgen Klopp refused to hide from Alisson’s costly errors as Liverpool fell to a disappointing 4-1 defeat against Manchester City on Sunday. Liverpool knew heading into the game how important a result against City would be in regards to maintaining a title challenge.

But they were coming up against a Pep Guardiola side bang in form and it was the visitors who had the best chance early on to open the scoring.

Fabinho was penalised for bringing Raheem Sterling down in the box with Ilkay Gundogan stepping up to take the spot kick, only for Liverpool to get let off the hook as the midfielder skied it over the bar.

He made amends for his miss early in the second half, but Liverpool were soon back in it when Mohamed Salah scored a penalty on the hour mark.

Liverpool failed to kick on though and disaster struck in the latter stages of the match as the usually ever-reliant Alisson made a couple of calamitous errors. 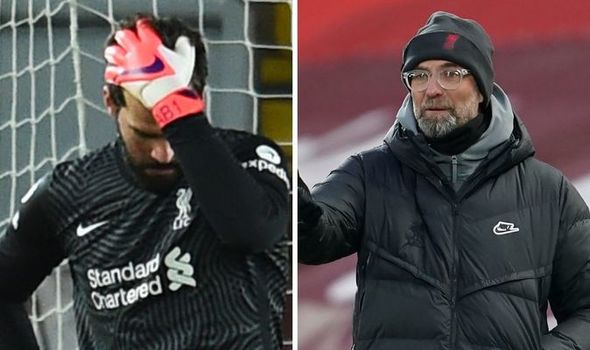 First the Brazilian failed to clear his lines as he was closed down before Gundogan scored his second of the game.

The second though was arguably even worse as he passed directly to Bernardo Silva, who then dinked over the Brazilian to Raheem Sterling at the backpost.

Phil Foden then scored a masterful goal late on to finish Liverpool off but Alisson’s errors were a main talking point after the game.

Klopp refused to put too much blame on the shot-stopper as he’s “saved” Liverpool on numerous occasions.

However, the Liverpool boss was at a loss as to why his goalkeeper didn’t clear the ball on either occasion.

“We cannot hide them and we don’t have to,” Klopp said.

“It’s true that we didn’t give him a lot of options, especially the first one but the second one he just miss-hit the ball.

“There’s not a real explanation for it, may be he had cold feet or something.

“I know it sounds funny but it could be but then there’s still the opportunity to kick it in the stands.

“But, again, Ali has saved our life plenty of times no doubt about that and tonight he made two mistakes. That’s how it is.”