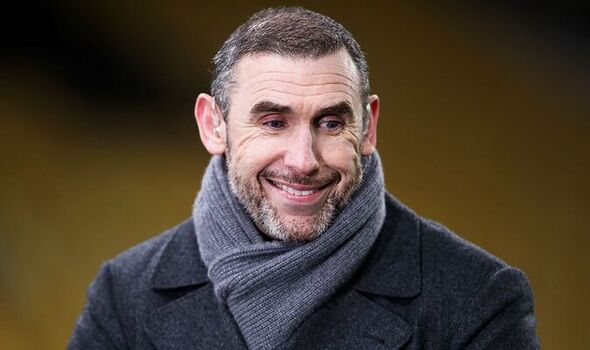 Bukayo Saka and Gabriel Martinelli have become true leaders at Arsenal this season, says Gunners legend Martin Keown. The 21-year-old duo have started every Premier League game so far this term and Keown has backed them to cause Chelsea problems on Sunday.

Saka and Martinelli have both scored five goals apiece this season and registered six and two assists respectively. Summer signing Gabriel Jesus has hit a lean patch but the young duo have stood up when needed.

Arsenal head to Stamford Bridge knowing only a victory will guarantee they stay at the top of the table at the end of the weekend. Keown says the Gunners’ wide players are key to their success in west London and has urged their team-mates to get them into the game as much as possible.

Mikel Arteta looks ahead to Pierre-Emerick Aubameyang reunion against Chelsea

“At the start of the season it was [Oleksandr] Zinchenko and Jesus who kind of raised the bar. Zinchenko has been injured for some time and Jesus has fallen away with his goals, but those two young individuals are really leading them at the top of the table.

“They’re quite magnificent and if you get the ball to those two as much as possible in wide areas then they could really punish Chelsea at the weekend.”

Keown isn’t too concerned about Jesus’ lack of goals as he provides a lot more for the side. He added: “No goal in eight games but he does so much for the team, you cannot dispute that.

“He’s tenacious, he offers himself all around the pitch. Maybe he needs to be a bit more selfish and be more central, but that’s not him, that’s not his personality.”

Arsenal boss Mikel Arteta has the same view on Jesus as Keown and has backed him to find the net soon. Arteta said: “That’s going to change [his bad luck], he’s getting the situations, he’s getting the chances, he’s contributing to the team an awful lot, he’s helping to win matches, the way he competes for every ball in every single action is incredible.

“It will come, he needs to be patient, he’s been through that in the past and he needs to learn those lessons and don’t stop doing those other things that he’s doing so well, because that’s going to maintain the level of him and the team.”