Barcelona president Joan Laporta has hit back at Gary Neville after the former Manchester United defender urged Frenkie de Jong to take legal action against the La Liga club. Neville made the demand after it was reported that Barca had asked De Jong to take a wage cut to remain at the club.

Wide-ranging claims suggest that De Jong is due around £14million in deferred wages after the coronavirus pandemic. The Dutchman wants that paid before considering a move to Man United, who have agreed a £62m deal with Barca.

Neville accused the Spanish club of ‘bullying’ the midfielder and urged the Red Devils transfer target to seek legal advice. The former United captain tweeted last week: “De Jong should consider legal action [versus] Barcelona and all players should be behind him!

“A club spending fortunes on new players whilst not paying the ones they have under contract their full money is immoral and a breach. [Players’ union] FIFPRO should be all over bullying like this and stop it.”

JUST IN: Chelsea could rival Man Utd bid for De Jong but on one condition 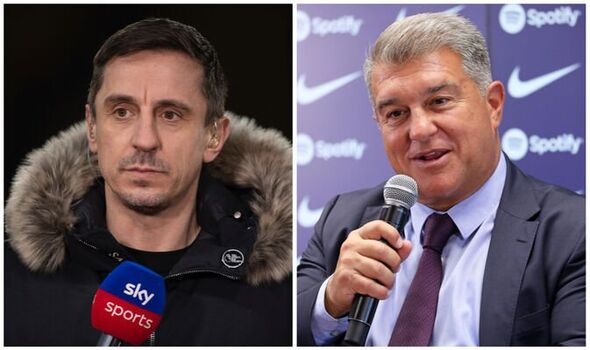 Laporta has said he respects Neville’s view but insists he is wrong. The Spaniard told CBS Sports: “No answer. I respect his opinion. But in my opinion he’s not right because I insist we are respecting all our players. We follow the contracts. If we invest in new players it’s to make the club more competitive.

“It’s a circle: You invest in new players, the fans engage and that in turn improves our economy. Gary has been a very good football player for Manchester United. I respect his opinion and that’s all I have to say.”

Despite financial issues, Barca have spent over £100m on Jules Kounde, Raphinha and Roberto Lewandowski. Quizzed on the morality of the cash-strapped La Liga outfit spending big money on new signings instead of paying off deferred wages, Laporta continued: “I respect any opinion, but when people form this view they often don’t have enough information to make such a statement. 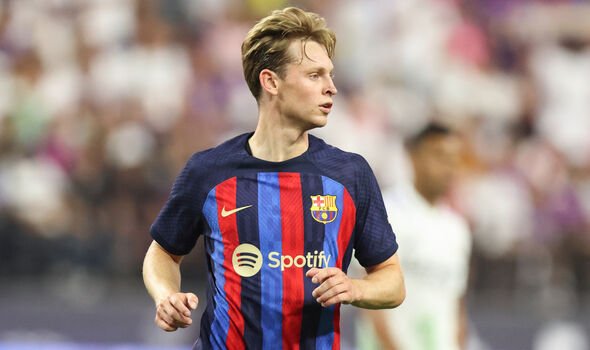 “To me, the players we have signed this summer are investments not expenses. And our existing players understand this perfectly. The new signings adjust their salaries to the new structure that we have created and all we ask is the current squad, where possible, do the same.

“People outside the club don’t have all the information. We have to act this way or the club will probably disappear. We are not risking the club. On the contrary. I love Barcelona. So you can imagine, I don’t take any decisions that risk the future of the club and our 122 years of history.

“It will be very difficult for anyone to damage the club with me as president because I am here to protect Barcelona. We have been so brave during difficult times and I know the fans believe in us. I feel the confidence and trust of the fans and what I want to do is bring back the splendorous times from my first period as president.”