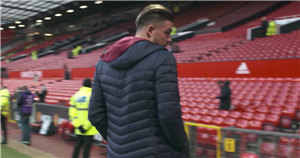 Manchester United are reportedly ready to push on for a move for Jack Grealish this summer.

The playmaker has starred for Aston Villa this season leading to Ole Gunnar Solskjaer being keen to bring him to Old Trafford.

And the English ace has already impressed at the Theatre of Dreams, stunning United with his wonderful solo effort in the Premier League back in December.

He struck a beauty and put in a man of the match display in the draw with the Manchester Evening News later claiming Solskjaer pulled him over for a private chat in the tunnel after the game.

Grealish himself later admitted it was his “favourite goal” and highlighted his lifelong dream to play at Old Trafford – something he could soon be doing with much more regularity.

"I’ve played there before in a reserve cup final but it’s not the same when it’s like that. That’s obviously my favourite ground in the Premier League.

"It was one of them, as soon as I shot I knew it was going into the top corner and I couldn’t have hit it any better."

Solskjaer also addressed the transfer links after the game, but remained tight-lipped with the press despite their interest.

"I can't talk too much about other teams' players, if they're Man United calibre or targets," Solskjaer said.

"But fantastic goal, I think he hit one of them corners I hit a couple of times.

"It was a great finish, but we should defend better, show him down the left.

"But what a goal and he played a good game."