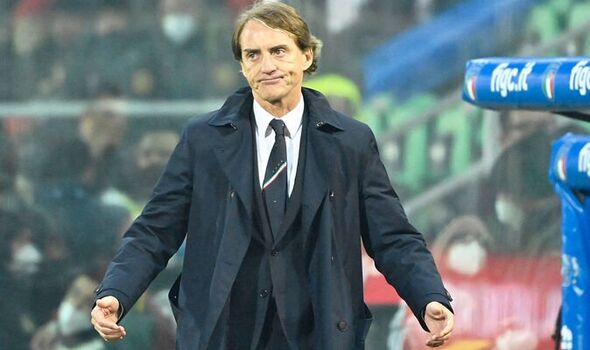 Roberto Mancini was left bewildered as Italy’s hopes of qualifying for the Qatar World Cup later this year were ended on Thursday. Mancini saw his side suffer a shock play-off defeat at the hands of North Macedonia to pile huge pressure on his position as manager.

Italy were huge favourites heading into the match at the Stadio Renzo Barbera. However, the nerves started once the visitors held on until half-time without conceding.

Italy had the vast majority of chances on the night but were unable to make the breakthrough. And in the second minute of stoppage time, Aleksandar Trajkovski let fly with a super long-range strike to give North Macedonia the lead and cue wild celebrations among the players and staff.

Italy were unable to equalise in the remaining minutes and suffered one of the most surprising defeats in their history. They will now not feature at the World Cup this year, the second consecutive time they have missed out on the tournament after not being present at Russia in 2018.

After the match, the 57-year-old was almost lost for words when speaking to the Italian press. He said: “I’m more than disappointed, I’ve nothing to say.

“Something incredible happened tonight. We deserved to win the Euros, now we’ve been really unlucky… but that’s it, that’s the reality. I’m sorry for the players”.

The former Manchester City boss was also asked about his future as Italy manager. But he refused to comment so soon after the final whistle. He said: “We will see. Now I feel too disappointed to speak about my future, we will see.

“I’m sure this team has a great future. I’m supporting these players now more than ever.”

Italy captain Giorgio Chiellini has revealed his disappointment at the result. He says his side have paid for mistakes they have made in recent months.

Chiellini told Rai: “There is a great disappointment, we played a good game where we certainly missed the goal. We weren’t presumptuous, but something was missing.

“Mistakes from September until today and we have paid for them, but I am proud of my teammates. We are disappointed, we are destroyed, we do not find the adjectives.

“Now there is only a great void. We have to start again, now it is difficult even to comment.”

Chiellini wants Mancini to stay on as manager despite the defeat. He added: “A big void will remain, I hope that for the future we can start again as happened with the victory of the European Championship.

“We still hope together with the coach, Mancini is essential for this national team.”