I quit football for 14 years after homophobia stopped me playing 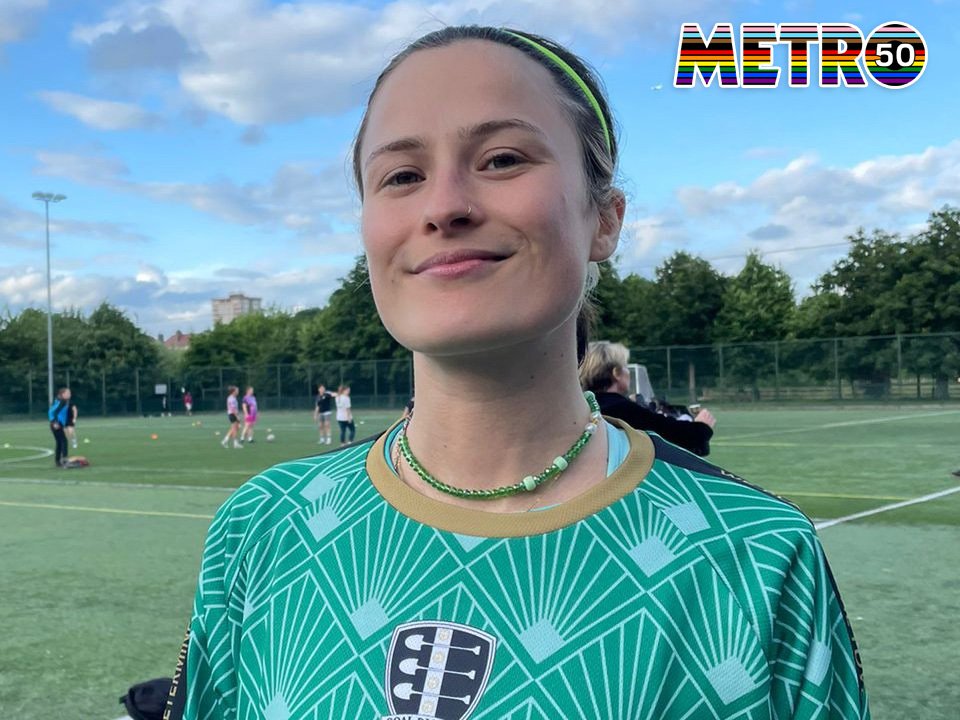 As I made a diving save across the goalpost, my team erupted in cheers.

It felt euphoric to be back doing the thing that I loved as a child, and to be in such a supportive environment – 11 years after giving it up.

Playing after such a long break from the pitch was terrifying, but exhilarating.

I’d abandoned my favourite sport due to persistent homophobia – but after finding an LGBTQ+ inclusive team, I’ve fallen in love with football all over again.

Football was a hugely important part of my life from a young age.

I used to have kick-arounds with friends between the ages of seven and 11 after school (even though I was the only girl that played) and go to matches with my dad. A Bovril and pie was our halftime ritual.

My parents were incredibly supportive of my love of football. They encouraged me to join my first all-female team when I was 11. I played in goal and they came to every match, cheering me on from the sidelines – even if we were losing 8-0.

I was used to hearing homophobic comments towards women playing football throughout my childhood, it was something that pretty much all of my teammates experienced.

I was ridiculed by people at school who called me a d**e for playing the sport.

At first, I tried to not let it bother me but as I progressed through school it started to affect me more.

Being asked if I was a lesbian, just because I played football became exhausting. It also made me spiral – I knew I was attracted to women more than I was to men but I didn’t want to admit this to anyone, including myself.

Hardly anyone was openly LGBT+ in school, and those who were either gossiped about or bullied. I couldn’t take the constant speculation of my sexuality and decided to hang up my football boots when I was 14.

Essentially, homophobia and the misconception that football is exclusively a men’s sport forced me out of a game I loved.

I didn’t play football for over a decade after that.

My experience is sadly not uncommon – many LGBTQ+ people still feel unsafe and unwelcome in sport. Out in Sport found that across Europe, 82% of LGBTQ+ people who take part in sport have experienced or witnessed homophobia, biphobia, and transphobia in the past 12 months.

It was incredible to see Jake Daniels come out last month and become the first openly gay male professional footballer in Britain in 30 years. But the fact that it took three decades for this to happen shows how much work is still left to do.

My coming out has been a gradual process.

I knew I was attracted to women, but because of the lack of visibility of LGBTQ+ people in my hometown of Hartlepool, I never thought that being gay was an option for me.

Things started to change when I moved to Birmingham for university at 18. During my first year, I told my brother and sister that I liked girls and had their full support. With my brother, it was over text message and his response was ‘mint lol’, whereas my sister went for ‘I LOVE lesbians!’

It took several years for me to be open with other members of my family and friends about my sexuality. I had internalised the homophobic reactions towards my love of football and felt like ‘lesbian’ was a dirty word.

Not everyone around me was accepting, but my LGBTQ+ friends were a lifeline. They showed me that our identities were something to be proud of and it made such a difference to how I saw myself.

Starting a new job at an inclusive workplace was also a turning point. Bringing my authentic self to work helped me care less about what other people think and opened my mind to the idea of getting back on the pitch.

I first heard about Goal Diggers through word of mouth, as well as other inclusive teams – with excellent names such as Bend It Like Peckham.

Goal Diggers is a non-profit club set up in London to make football more available and accessible to all women and non-binary people – regardless of previous experience or ability.

After many failed attempts of starting a five-a-side team with friends, I saw on Instagram they were recruiting for keepers. I was hesitant, but I decided to reach out about going to a training session.

Playing football for the first time since my teens was a nerve-racking experience, but Goal Diggers’ inclusive and welcoming atmosphere made me feel at ease. When I arrived at my first training, I learned the team’s ethos is to show that football is a sport for everyone.

Goal Diggers recognise the importance of trans inclusion in sport – at every training and match, we all share our pronouns to ensure it’s a space where trans and non-binary people feel welcome.

Their kit also features ‘1921’ instead of individual numbers to mark the year that the FA banned women from football. The ban was a reaction to the popularity of the women’s game and was enforced until 1971.

Goal Diggers wanted to commemorate the ban to educate people on the reason women are still – to this day – playing catch up, and how the ripples of this ban are still being felt.

Joining the team has been transformative. Being able to look around and see a breadth of queerness has allowed me to celebrate my sexuality.

After each training session, my team and I head to the local pub for pints and pizza. It feels amazing to be able to be my authentic self the whole time – both on and off the pitch.

Today, I can proudly own being a football-playing lesbian. No longer do I see the word ‘lesbian’ as an insult.

I’ve also started going to matches again. I recently went to a Women’s Super League match and loved how supportive the atmosphere was.

We all have a responsibility to make sport a welcoming place for all, regardless of gender, sexuality, ethnicity, age or ability.

Of course, it’s vital for teams to ensure that their club is a safe space, and that discrimination of any kind is challenged – but they can’t ensure sport is everyone’s game alone.

We can make sport an inclusive environment by supporting and uplifting LGBTQ+ players, and challenging offensive language when we hear it.

Now I’m part of the Goal Diggers community, I hope to be playing football for many years to come.

This year marks 50 years of Pride, so it seems only fitting that Metro.co.uk goes above and beyond in our ongoing LGBTQ+ support, through a wealth of content that not only celebrates all things Pride, but also share stories, take time to reflect and raises awareness for the community this Pride Month.

And we’ve got some great names on board to help us, too. From a list of famous guest editors taking over the site for a week that includes Rob Rinder, Nicola Adams, Peter Tatchell, Kimberly Hart-Simpson, John Whaite, Anna Richardson and Dr Ranj, we’ll also have the likes Sir Ian McKellen and Drag Race stars The Vivienne, Lawrence Chaney and Tia Kofi offering their insights.

During Pride Month, which runs from 1 – 30 June, Metro.co.uk will also be supporting Kyiv Pride, a Ukrainian charity forced to work harder than ever to protect the rights of the LGBTQ+ community during times of conflict, and youth homelessness charity AKT. To find out more about their work, and what you can do to support them, click here.