Carlton’s backline injury crisis has deepened after mid-season recruit Sam Durdin became the latest casualty.
Durdin, playing his first game for the Blues in Thursday night’s loss to Richmond at the MCG, has strained a medial ligament, with the club on Friday confirming he will miss four weeks.
“He underwent scans on Friday morning which confirmed the injury, which at this stage will likely rule the key defender out until approximately round 19,” the Blues said in a statement.
However, Jack Martin (calf tightness) faces a fitness test ahead of next Saturday’s home clash against Fremantle at Marvel Stadium.
The Tigers also have injury issues. Utility Noah Balta (hamstring) will miss several weeks, but they expect Dustin Martin (illness) to return for next Saturday’s blockbuster against Geelong at the MCG.
Balta had scans on Friday on the hamstring he injured in the fourth quarter on Thursday. The strain was to the same hamstring which forced him out for three weeks earlier in the season.
Tigers senior advisor Neil Balme said the club would give Balta, who booted a goal and had 12 touches against the Blues, all the time he needs to recover.
– Sam McClure 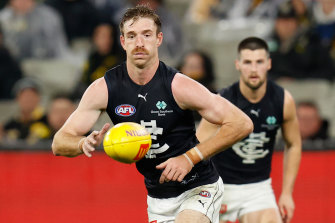 Nothing went right for St Kilda so to pick out any individuals would be harsh. That said, if the Saints are to beat Sydney, they need more from Jack Higgins and Dan Butler. The pair combined for just two goals and 16 possessions but of more concern to Brett Ratten and his coaching staff they did not stick a single tackle inside their forward 50. In fact, Higgins did not lay a tackle at all. The lack of pressure enabled Essendon’s half-backs to waltz out of defence. If it continues next week, they will be punished by the Swans, who are one of the best counterattacking teams in the league.

Weeks of mouthguards-in, full contact training is starting to pay dividends for Ben Rutten’s men, who were found wanting in the contested side of the game in the first half of the season. The focus on physicality has hardened up the Dons, who were too tough for the Saints a week after matching Carlton in this area. They made errors with the ball and still have holes in their defensive system, but their backs have a fighting chance when there is pressure up the ground. The Bombers will not make the eight but can shape it in the run home with home games against Sydney, Gold Coast, Port Adelaide and Richmond. If they can maintain this intensity, they will not be the easybeats they were. – Andrew Wu 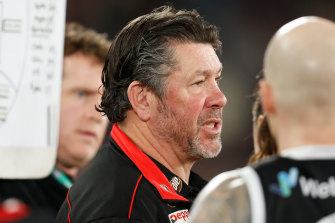 St Kilda’s stumble on Friday night puts them under pressure to make the finals.Credit:AFL Photos

The odds remain firmly stacked against them, but if Port Adelaide somehow manage to pinch a finals berth in 2022, they could well look back at their 23-point victory over Sydney as a watershed weekend.

With veteran superstars Travis Boak and Robbie Gray sidelined and playmaking midfielder Zak Butters (knee) and impressive first-game ruckman Brynn Teakle (broken collarbone) lost in the second quarter, the Power’s prospects after half-time appeared grim. Instead, they turned up the heat in spectacular style, rifling six unanswered goals after the break before the shell-shocked Swans could muster a single inside-50. 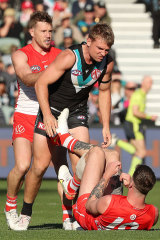 Port’s pressure was elite but Sydney’s implosions during that stretch were equally central. Ruckman Peter Ladhams was the worst offender, costing his side two goals – and himself a likely stint on the sidelines for crudely gut-punching a grounded Ollie Wines [his former captain] following a tackle – through needless, unexplainable ill-discipline against his old side. The Swans’ uncharacteristic recklessness and general untidiness haunted them on Saturday, but their well established track record suggests it can safely be written off as an aberration.
– Steve Barrett

The Eagles were in the frame for one of the upsets of the season but couldn’t make the most of their opportunities against the Cats when it mattered. At least they can hold their heads high after setting themselves a benchmark for pressure, especially in the first half. Key defender Jeremy McGovern unfortunately ended the match in hospital. The Cats prepared for the match professionally, ignoring the Eagles’ wretched run, and it served them well – they had to dig deep to get the job done. Tyson Stengle burnished a breakout season with a near-perfect small forward’s game and was arguably the difference between the sides.
– Andrew Stafford

The Bailey Smith controversy became background noise as the Western Bulldogs kept their finals hopes alive with a 20-point win over the Giants at the Sydney Showgrounds on Saturday night. With St Kilda and the Swans both losing, and playing each other next Saturday night at the SCG, the Bulldogs are now only a game out of the final eight with a decent percentage. The collective 230 points were the highest number kicked in an AFL match this season, highlighting that entertaining ball movement was not matched by modern day pressure.
– Malcolm Conn 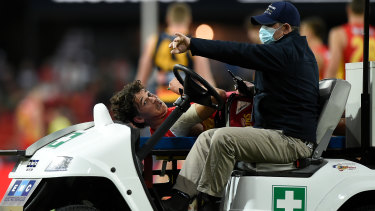 Wil Powell is carried from the field.Credit:AFL Photos

Gold Coast Suns coach Stuart Dew would have had two objectives against the Crows on Sunday – take home the four points and get through unscathed.

Unfortunately the latter did not come to fruition, with Wil Powell suffering a significant leg injury, while Connor Budarick also did his hamstring in the win.

With Ben King and Lachie Weller on the long-term injury list, and Jack Lukosius still a few weeks away from returning from a knee injury, the Suns face a season-defining fortnight against Port Adelaide and Collingwood with limited stock available to keep their top-eight ambitions alive. The positives were that every time the Crows challenged, the Suns responded. Mabior Chol and Levi Casboult have been undersold as a two-pronged forward combination, while their smalls in Izak Rankine and Joel Jeffrey are as dangerous as any.
The Crows are still very much a work-in-progress. They won three games in Matthew Nicks′ first season in 2020, and seven in 2021. So far, they’re 4-9, and need to find at least three more wins to get a pass mark out of this season. They play North Melbourne next week – both sides will be desperate to win that – and play the Roos a second time later in the year, as well as the Eagles and Hawks. They’re the four games they’ll be eyeing off to finish the season strongly.
– Damien Ractliffe

In match review news, Sydney’s Peter Ladhams was charged with striking former Power teammate Ollie Wines in what could only be described as a ‘brain explosion’. Ladhams was charged in the third quarter and was later offered a one-match ban with an early plea after the incident was assessed as intentional conduct and medium impact. GWS big man Braydon Preuss was also offered a one-match ban after he was charged with rough conduct for a dangerous tackle on Bulldogs counterpart Tim English.