Man Utd have won eight of their last 10 in the Premier League and moved level on points with leaders Liverpool on New Year’s Day. The two rivals meet on January 17, and on the latest Gary Neville Podcast, the Sky Sports pundit discusses the reasons behind his former club’s improved form.

Gary Neville says Manchester United’s “game-changers” have propelled the club back up the league and, while performance consistency remains elusive, confidence is building among Ole Gunnar Solskjaer’s squad.

Two months on from a demoralising defeat at home to Arsenal, which left them in 15th, United moved level on points with Premier League leaders Liverpool on Friday with a 2-1 win over Aston Villa.

The victory was United’s eighth in their past 10 league games since that loss to the Gunners and Sky Sports pundit Neville has put the remarkable turn around down to the individual qualities of players at the club.

However, while the team still struggle in their play at times, Neville says “something is growing” in the camp and there is exciting progress being made, with United’s mouth-watering trip to Liverpool on January 17, live on Sky Sports, looming.

“It was a big, big win for United,” he said on The Gary Neville Podcast.

“I’m so looking forward to that [Liverpool game]. Not because I’m here thinking United can go to Anfield and win, but because United have become competitive out of nowhere.

“I remember sitting at Old Trafford after that Manchester derby [goalless draw], sat with Roy Keane and Micah Richards, saying that Chelsea, Liverpool and Tottenham were far ahead of the two Manchester clubs at this moment in time.

“If you’d have said at the start of the season, or even five weeks ago, that United would be level with Liverpool, I’d have said no chance, that can’t happen. 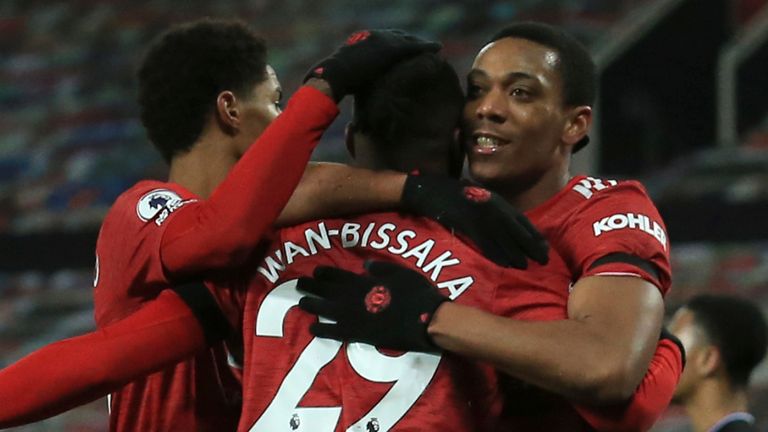 “They do it in moments, and they don’t always have to be playing well when you have those players on the pitch.

“The performances are getting better, it’s a work in progress, it’s not by any stretch the finished article. At times in games they mesmerise you for 10 minutes, and then can turn into a nightmare for 10 minutes.

“But there’s confidence building, something is growing, there’s a spirit at the end of the game with the players celebrating was nice to see.

“I think a couple of years ago I said quite publicly at times there was a team I didn’t like watching wearing those red shirts. I see them now, and I felt last season they looked a lot happier, and this season they seem happier again.

“And for that, we’ll look forward to that trip to Anfield with great glee – and hope we can tweak the tail of the tiger a little bit more!”

Listen to The Gary Neville Podcast for more from the Sky Sports pundit, including how Manchester City got “back to their best” on Sunday and the problems facing Frank Lampard after Chelsea’s defeat to Pep Guardiola’s side.

Plus, he discusses Leicester’s continued goof form which has lifted them to third, Heung-Min Son’s standout quality, Arsenal’s improvement, and why football should and can continue amid the rising coronavirus concerns.