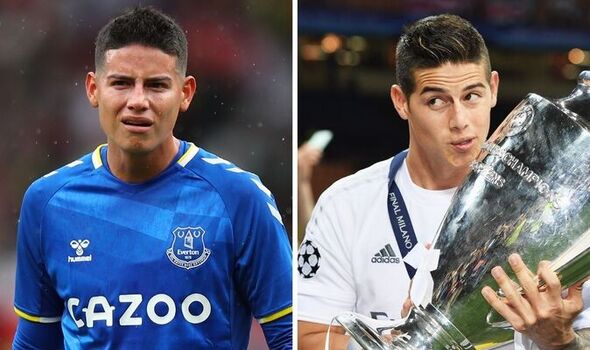 Former Everton and Real Madrid man James Rodriguez has turned his back on his old clubs by boldly claiming he wants Liverpool to win the Champions League final. The attacking midfielder, who left Goodison Park last September to sign for Qatari side Al Rayyan, was surprisingly happy to brush his Toffees and Los Blancos connections to one side by backing the Reds to win the trophy.

The two European giants collide at the Stade de France on May 28 for the biggest prize in club football, a trophy neither side has been shy of winning over the years.

The showpiece occasion will see a repeat of the 2018 final in Kyiv, where Real Madrid beat Liverpool 3-1 courtesy of a double from substitute Gareth Bale.

And this time around Rodriguez is hopeful Jurgen Klopp’s side will pull it off – all because of his international team-mate Luis Diaz.

“I want Liverpool to be champion,” he said. “I have many friends in Real Madrid and it is a difficult team for this type of match, but I want Lucho (Diaz) to win.”

Rodriguez is understood to have played a part in helping Diaz choose Liverpool in January.

The tricky winger, who picked up an assist in Tuesday night’s 2-1 win at Aston Villa, attracted interest from Everton last summer plus more recently, Tottenham, West Ham and Manchester United.

But it’s been reported that both Rodriguez and iconic Colombian striker Radamel Falcao helped push Diaz towards Liverpool, who were evidently the best club for him.

The 25-year-old fits Klopp’s system like a glove, something that has been there for all to see in his opening four months as a Red.

Diaz has six goals and three assists since making the £37.5million switch from FC Porto in January and his arrival helped Liverpool consolidate their Premier League title challenge – pushing Manchester City all the way.

He will now be hoping to cement his place in the starting XI ahead of the Champions League final.

The former Porto man has seemingly moved ahead of Diogo Jota in the Liverpool pecking order, despite starting alongside the Portuguese at Villa Park.

He will be hoping to keep his place for this weekend’s FA Cup final after back-to-back starts against Tottenham and Villa.

Former Barcelona forward Rivaldo gave Diaz rave reviews in the Spanish press after his game-changing impact from the bench against Villarreal in the Champions League semi-final.

He believes Diaz is currently certain to start the Champions League final and it’s Jota and Roberto Firmino who have work to do, to force their way into Klopp’s thinking.

“Luis Diaz had a good impact on the game and changed its course, so he was undoubtedly a crucial piece in Liverpool’s success at Villarreal,” Rivaldo told Spanish news outlet Marca.

“As things stand I am not confident that he will start in the final in Paris, there is still a long way to go for this game and players like Diogo Jota or Roberto Firmino will try to prove their worth and challenge the status of Diaz’s current role in the squad.”