FIFA president Gianni Infantino should not have hidden any meetings he had with Super League clubs from UEFA and the affected competitions, says La Liga president Javier Tebas.

The head of the Spanish top flight remains convinced Infantino played a part in the discussions which ultimately led to the foundation of the Super League by 12 clubs last month, and the FIFA boss did not deny speaking to those clubs when asked about it last week, though he did say he had not colluded with them.

Tebas said Infantino’s first loyalty should have been to the existing global institutions.

“Of course the president can talk to who he wants, and be with who he wants to talk about whatever. What we’re talking about is the football institutions and his loyalty,” Tebas told the Club Advisory Platform of the European Leagues in Madrid.

“If he is being shown a format of a Super League – and a closed Super League – as soon as he had finished meeting with those clubs the first thing he should have done was to ring the president of UEFA, and all the leagues that would have been affected by it.

“He shouldn’t have kept it secret.”

Infantino was asked about his role in the Super League discussions by the PA news agency at FIFA Congress last Friday.

He said: “At FIFA it is my responsibility to hear, to meet, to discuss with football stakeholders – our member associations, leagues, our clubs, everyone: big, medium and small.

“To listen to some clubs and to speak with some clubs doesn’t mean in any way whatsoever that FIFA was behind, was colluding, was plotting, [on] any Super League project.”

He said the Super League clubs had treated the leagues and other clubs like “stupid naive puppets” in the way they had behaved, adding he would “respect” any sanctions UEFA imposed on Real Madrid, Barcelona and Juventus over their refusal to renounce the Super League. 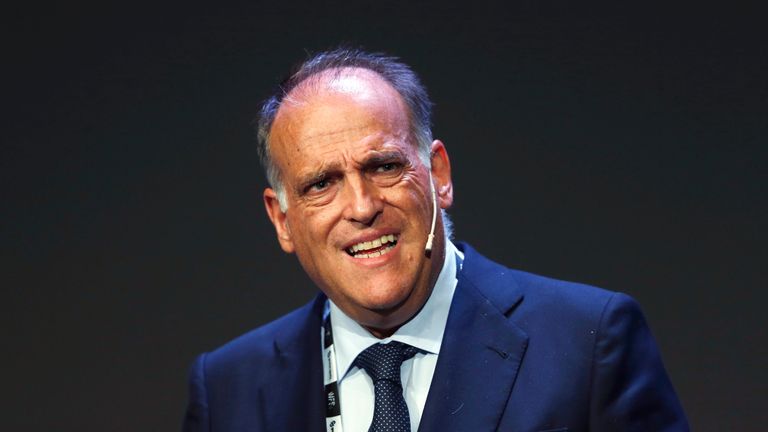 “The fact that they’re a big club, it doesn’t mean that they know everything that is going on in football. That press release (when the league was founded) shows how ignorant they are.”

Premier League chief executive Richard Masters told the meeting that the events of the last 18 months demonstrated the need for a “rebalancing” of European football governance.

Aside from the Super League disruption, the continent’s top clubs had also driven reforms to UEFA’s club competitions from 2024 which included an increase in the number of group stage matches from six to 10.

The 2024 proposals also include plans to allow two clubs to qualify for Europe based on historical performance, a move which would clearly benefit the traditional big sides and something the Premier League and its clubs have opposed.

Masters said: “We need to look at the governance model within European football because it needs rebalancing in my view.

“It means that in the future when we talk about all of these really important things and solutions we need, is that all the people in this room have a stronger voice.

“So that’s leagues, the wider group of clubs, and also fans have a voice in the future. In the future of the game. That seems to me to be what needs to change, and that’s the only way you can bring the unity that Aleksander (Ceferin) was talking about [in his video address].”

Speaking about the formation and collapse of the Super League, Masters said: “What happened created so much division and uncertainty at a time when we least needed it and I think the reaction in this country was incredibly unified.

“The reaction of fans was decisive. That concept was short-lived, and clearly there are issues in the short term for us to resolve and I am confident we will be able to do that.

“That means strengthening our regulations and aligning everybody around a core set of principles.

“It’s a situation that does demand a reset, it demands openness, talking about the issues that still face us in English football or European football but without the threat of a European Super League.”

Ceferin: We want to maximise passion, not profits

UEFA president Aleksander Ceferin said in a video address to the meeting: “You can rest assured that UEFA is committed more than ever to supporting the entire football pyramid. We want to maximise passion, not profits.

“We want to lend a hand, not show a fist. All leagues, all clubs and all fans are equally important to holding the pyramid together. The smallest stone of the pyramid is of no less importance than the biggest.

“The big clubs do not become big in isolation. They needed to play all clubs to become victorious and establish their fame. This is the irony of the failed endeavour of the ill-fated Super League. They believed they had to knock out the podium on which they stand.”