Erik ten Hag has ruled himself out of the running to become the next Tottenham manager by signing a new contract with Ajax. Ten Hag had been seen as the frontrunner to replace Jose Mourinho at Spurs, but has now committed his future to the Dutch club.

The 51-year-old, who previously had just one year left on his deal, has signed a one-year extension with Ajax, keeping him in Amsterdam until June 2023.

Ten Hag has been at Ajax since December 2017 and was reportedly top of Spurs chairman Daniel Levy’s long list for their next manager after Julian Nagelsmann became unavailable.

Nagelsmann has attracted plenty of interest from clubs around Europe for his work with RB Leipzig, but the 33-year-old has agreed to join Bayern Munich on a five-year contract this summer.

Once Nagelsmann’s move to Bayern was confirmed on Tuesday, attention turned to Ten Hag, who emerged as a viable option due to his style of football and success with Ajax.

Having won everything domestically in the Netherlands, it was thought he would be open to discussing the vacant manager’s job in north London.

JUST IN: Jose Mourinho to return to management ‘very soon’ after Tottenham sack 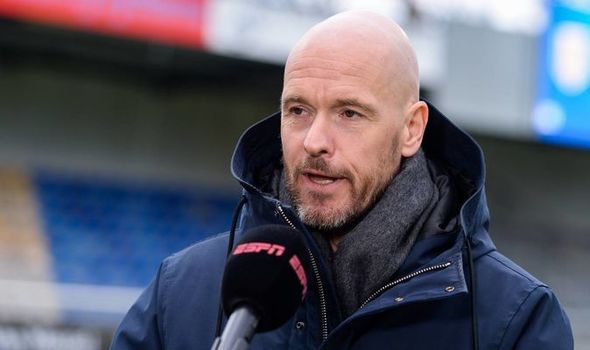 However, his close relationship with Ajax director of football – and former Arsenal player – Marc Overmars has seen him stay with the club.

Ajax are 12 points clear at the top of the Eredivisie and need just a single point against Emmen this Sunday to confirm Ten Hag’s second league title with the club.

With Ten Hag now out of the running and Leicester boss Brendan Rodgers having ruled himself out, Levy will now be forced to turn his attention elsewhere to replace Mourinho, who was sacked last Monday.

However, several managers who have cropped up in discussions over the White Hart Lane post are thought to be wide of the mark.

Ryan Mason is in interim charge of the club until the end of the season and has five more Premier League games in which to try and qualify Spurs for the Champions League.

Tottenham are currently seventh, five points adrift of the top four ahead of Sunday’s match against bottom side Sheffield United.

After the Blades, Spurs face Leeds United, Wolves, Aston Villa and Leicester before the end of the season on May 23.