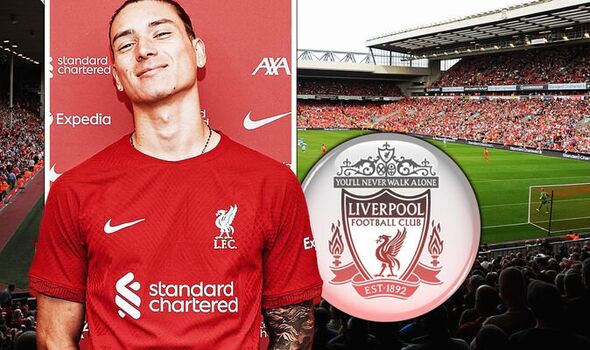 Darwin Nunez’s big-money transfer to Liverpool from Benfica has finally been confirmed by the club. The Uruguayan joins for an initial fee of £64 million rising to a potential £85 million if he reaches every milestone possible – ranging from scoring goals to winning the Champions League. The player has signed a six-year contract.

Liverpool announced the news through a video on their Twitter account. He will wear the No.27 shirt at Anfield.

Speaking following the move, Nunez said: “I’m really happy and delighted to be here at Liverpool. It’s a massive club. I’d like to thank my partner and my parents and my son, who is a real source of pride for me. They’ve been really important to me in the stages in my career. I’m really proud of them, and for the work we do, me and my partner, as a team and I’m grateful to her that I’m here.

“As I say, I’ve watched quite a lot and it’s a very big club and I hope I can give everything that I’ve got in order to help the team.” He also went on to add: “When I arrived at the training ground, I was really surprised to see the set-up and the structure and all the trophies here.

“You can then imagine yourself winning more trophies and then later on when you come here again and see the trophies on display, you can say, ‘Look, I was a part of that, I was there at that time, winning trophies.’

“That’s one of the reasons why I came here to Liverpool – to win trophies and titles. I want to win a lot of trophies at Liverpool.”

The move is a real statement of intent from Liverpool, and comes after their main title rivals Manchester City announced the signing of their own big-money striker in Norway hitman Erling Haaland.

And it remains to be seen when the 22-year-old makes his debut, with a mouthwatering friendly against Manchester United on July 12 on the horizon.