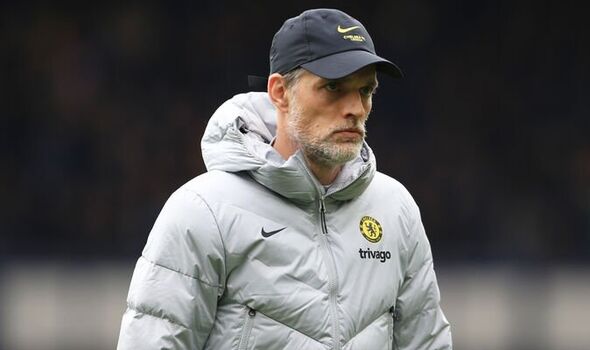 Thomas Tuchel is ‘genuinely concerned’ that Chelsea might fail to qualify for the Champions League after another dismal Premier League defeat, according to reports. The Blues’ 1-0 defeat by relegation-threatened Everton on Sunday means they have won just one of their last four matches.

Chelsea defeated West Ham a week ago but have now been beaten by Arsenal and Everton in recent Premier League fixtures. They also stuttered to a 1-1 draw with Manchester United.

Tuchel’s side had initially seemed certainties to finish in the top four but their form sees Arsenal now just three points behind, while Tottenham – who are fifth – are five points adrift of the west Londoners after 35 matches.

It comes amid uncertainty over the club’s future. Raine have confirmed Todd Boehly’s consortium as their preferred bidder but the takeover process is still ongoing while the government continues to apply pressure. Culture secretary Nadine Dorries ominously said last week that the Premier League club are on “borrowed time”.

According to the Mirror, Tuchel is worried about the short-term, with the German unable to make summer plans until Chelsea’s form and the ownership issue are both resolved. Antonio Rudiger has already decided to leave and his centre-back partner Andreas Christensen could still follow him out of Stamford Bridge when his contract expires at the end of June.

Rudiger is widely expected to join Real Madrid while Christensen has been linked with La Liga rivals Barcelona. Tuchel is unable to source replacements until Chelsea are no longer under an effective transfer ban.

Players good enough to replace the pair – who have been key to European success under Tuchel – will likely only join if Chelsea are playing in the Champions League next term. The Blues face Wolves, Leeds, Leicester and Watford, while they also clash with Liverpool in the FA Cup final this month.

But after Cesar Azpilicueta’s error allowed Richarlison to score in Sunday’s defeat, Tuchel worryingly suggested that he had run out of ideas to fix his side’s results. He said: “If there is something I can do, I will try it, but if I knew about it, I would have done it before.

“I think, for me, the key is to have a clean sheet. Manchester United was a different game, more open, fluid, and more spaces, and we finally scored late and conceded straight away.

For me, this is more like the game against West Ham. The opponent defends deep, we struggled to find space in the first half, but against West Ham, we had a clean sheet and played without any big mistakes.

“That gives us the chance to score late. If you run behind against an opponent like this, in this atmosphere and install emotion and belief in a stadium like this and the opponent’s team, you struggle.”