Wellington Hurricanes loose forward Du’Plessis Kirifi has complained of racial abuse from the crowd at Leichhardt Oval during Saturday’s Super Rugby clash against the NSW Waratahs.

The 25-year-old, whose father is Samoan, raised his middle finger at the crowd after the Hurricanes’ 22-18 win and said it was in reaction to racial slurs.

“I love when the crowds are hyped and throw chat from the stands. But there’s a line and just because you’re in the crowd doesn’t give you the right to talk about my mother or my race,” Kirifi wrote on social media.

“Abuse from the sideline is part of our job, and it’s a part I personally love – however this doesn’t justify racial slurs or comments about my family.”

Kirifi apologised for his hand gesture after the match, saying he wore his heart on his sleeve and was not perfect.

“If I had my time again I’d definitely act in a different way,” he added. 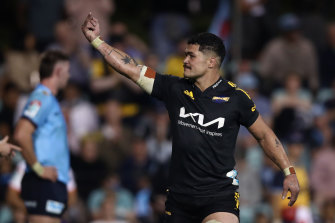 “He regrets what he did, but I can totally understand why he did it, in the heat of the moment, after allegedly hearing that kind of language,” CEO Avan Lee told New Zealand media.

Kirifi’s complaint has overshadowed the Waratahs’ preparations for the competition’s “Culture Round” of matches this weekend, which has Australian teams recognising the contributions of Indigenous players to the sport.

The Waratahs said they were disappointed to be made aware of Kirifi’s allegation and had reached out to match-day security and event staff at the stadium.

However, no report of abuse had been lodged or identified through CCTV footage, a spokesman said on Wednesday.

“There is no place for racism in society and this behaviour will not be tolerated,” the Waratahs said.

“The NSW Waratahs celebrate the multicultural diversity of our team and are proud to embrace the inclusiveness of all cultures and races in rugby.”