England could be in for a reality check against Wallabies: Deans

Former Wallabies coach Robbie Deans believes England boss Eddie Jones will be “expecting” to beat Australia in a tantalising three-Test series in July but has warned he might be in for a rude shock.

Anticipation is building for a blockbuster series on the horizon between Australia and England – two teams engaged in a fierce rivalry in recent years. 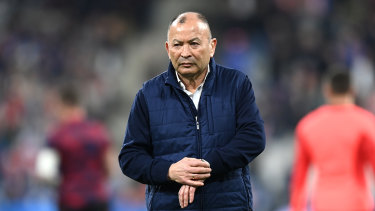 Jones and his England side arrive in Australia next month before a series opener on July 2 in Perth, aiming to once again assert their dominance after a 3-0 series win on these shores six years ago.

Deans, Australia’s most-capped Wallabies coach, isn’t convinced that England will give the men in gold a touch-up, despite winning their last eight matches against the Wallabies since that one-sided 2016 series.

“No doubt about it, Eddie will be looking at it and expecting to win. It won’t be straightforward,” Deans told reporters from Japan, having just coached the Saitama Panasonic Wild Knights to victory in the Japan Rugby League One final.

Asked if Jones, a fellow ex-Wallabies coach, would have a few tricks up his sleeve, Deans replied: “I hope so. He’ll need them.”

Deans has been watching Australian rugby closely from afar, despite leaving the Wallabies almost a decade ago.

“You can only take so much punishment, particularly if you’re a proud sporting nation like Australia,” Deans said.

“They were always going to respond and they exposed a lot of young players through Super Rugby. They’re on the incline and the international program will benefit from that. They’ll have more depth, more competition, more ability to ride out injuries and form. And they’ve got the ultimate incentive now, with two World Cups ahead of them.” 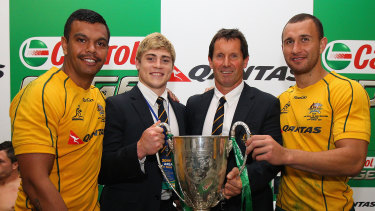 Deans was asked for his thoughts on the trio of Australian overseas-based players – Quade Cooper, Samu Kerevi and Marika Koroibete – who are tipped to be included in Dave Rennie’s Wallabies squad next week.

Cooper was handed his Wallabies debut by Deans against Italy in 2008.

“I haven’t seen much of Quade, he’s been playing in the [Japanese] second division. He’ll be in the first division next year,” Deans said. “But I noticed yesterday he received player of the second division [award], so he’s obviously been doing pretty well. He did well in his last outings [for Australia] and he’s another year wiser. I’m sure he’ll do well.

“He’ll be excited about playing England, that’s where he started in 2010. If you look at the highlights of the Perth Test [against England in 2010], you’ll see his immediate impact, particularly in the outside channels. That’s going to be a good series to watch and I’m sure all of those boys are excited about playing in that.

“Marika’s good to go. Let’s hope they get some ball to him.

“One thing you can be sure of is Australia will have a plan. I think it’s a great opportunity for them to give access to these guys. It’s the year before a World Cup, so everyone’s going to be very keen to make that.

“It’s a chance to mix up combinations, provide experience, provide opportunities for some players, particularly those coming from offshore who might not be certain to make the World Cup. That’s stimulating for the group and stimulating for the players concerned. It’s no lose really.”