Blues hold off Brumbies to set up Super final against Crusaders

New Zealand’s stranglehold on the Super Rugby Pacific will continue for another year after the Blues snuffed out the hopes of the remaining Australian side, beating the Brumbies 20-19 at Eden Park.

The Brumbies took a 7-0 lead after three minutes only to concede the next 20 points before staging a brave second-half fightback. 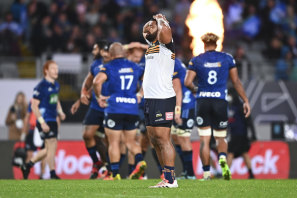 Scott Sio of the Brumbies looks on in disappointment at full-time.Credit:Getty

It clears the path for the Blues to host the Crusaders in the final next weekend, while it was a 13th unsuccessful attempt by an Australian side to win a play-off game in New Zealand.

Five-eighth Beauden Barrett was in impeccable touch, constantly creating opportunities for the Blues while flawless in defence and running for 99m.

The Brumbies made a flying start with centre Irae Simone bursting through the Blues’ line off the back of a scrum and running 40m to score easily for 7-0 lead.

The Blues found their feet with two penalties and dragged the score back to 7-6, their backs catching fire and combining brilliantly to find a try for Hoskins Sotutu on 24 minutes.

Barrett looked unstoppable and jinked his way around multiple Brumbies defenders before creating an opportunity for Mark Telea to score for 20-7, and only the crossbar denied the No.10 a long-bomb drop goal on half-time.

Blues hooker Kurt Eklund was sin-binned for a dumping tackle on Andy Muirhead and the Brumbies tried to make immediate use of the man advantage through Tom Banks, but Barrett was once again on hand to deliver a try-saving tackle in the corner.

The Brumbies’ patient, powerful rolling maul finally broke the line with Lachie Lonergan diving over on the hour, while only some elite desperation from Tom Wright denied Barrett a Blues’ try immediately after.

Searching to reduce the deficit, Brumbies’ substitute Sosefo Kautai forced a penalty at the breakdown and they repeatedly threatened the line off the back of their maul, although staunch Blues’ defence somehow kept the margin at more than a converted try.

In a thrilling finish, Lonergan barged over for his second try on 77 minutes, with Noah Lolesio’s conversion cutting the Blues’ lead to a point.

But he couldn’t seal the deal with the subsequent drop-goal attempt.

While the Blues were dominant in most areas, they were brutal at the scrum and their pack forced four penalties.

They struggled with discipline in the second half, conceding eight penalties to four and they were perhaps lucky not to receive a yellow card for the repeated fouling.