‘We are responsible’: Bulldogs floored by flu as players take blame for Barrett

Six Bulldogs players were told to stay home from interim coach Mick Potter’s first day at Belmore as Canterbury’s preparations for the bottom-of-the-table clash against the Tigers were thrown further into chaos on Wednesday.

Burton, Addo-Carr and Thompson joined Corey Waddell, Jayden Okunbor and Paul Alamoti in the sick bay, and all are considered doubtful for the trip across town to Leichhardt Oval on Friday night.

Jackson addressed the media for the first time since the Bulldogs split with Barrett earlier this week after the coach won just five of 34 matches in charge of the club.

Potter will be the interim coach until the end of the season after meeting Bulldogs general manager Phil Gould on Tuesday night.

The final details were nutted out on Wednesday and Potter was mainly observing the Bulldogs’ first session on his watch at Belmore, which was largely run by Barrett’s former assistant David Furner. 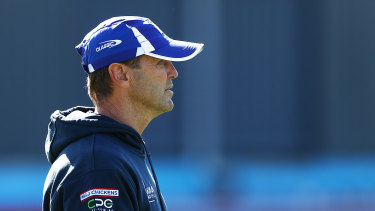 Jackson said the club’s players felt responsible for Barrett’s exit, before claiming the former Manly coach was the most “well-rounded coach I’ve had”.

“At the end of the day it’s the players that are responsible,” Jackson said. “We’re the ones on the field and we’re the ones that aren’t delivering the results.

“Unfortunately Trent’s fallen on his sword for us, but we’ll do everything in our power to try to change that. We’ll work hard and we’re not giving up on the season. It’s devastating for Trent and the way it’s all worked out.

“As you’d expect he was pretty upset [when I spoke to him]. He felt like he was going to be here long-term and be part of the change when we started turning things around here. I think he was disappointed he couldn’t be part of that.”

Jackson denied there would be a mass exodus following Brent Naden out the door at Belmore after the grand final speedster sealed a stunning switch to the Tigers just minutes before Tuesday’s 4pm deadline. Naden is expected to line up against his old club on Friday night.

Jackson confirmed he asked to front the Bulldogs board and plead for Barrett’s stay on Monday morning, but the decision was taken out of his hands.

“I asked if I could speak to them and let them know he has the support of all the players,” Jackson said. “That’s totally true. I fully support him and he’s a fantastic coach. I just want to make that known. He certainly has the full support of us, and personally he’s been fantastic for me.”