‘They were with me in spirit’: NRL’s oldest debutant pays tribute to late dad, brother

The only thing that could have made Jonathon Reuben’s long-awaited NRL debut even better is having his late father and brother in the stands to witness history.

Reuben became the oldest NRL debutant at 29 years and 92 days, eclipsing fellow St George Illawarra Dragons player Darren Nicholls, who was 29 years and 81 days when he debuted in 2018.

The winger only learned of his call-up at 5pm on Friday – three hours before kick-off against the Cowboys – and Dragons officials quickly arranged for his mother, Jessica, and a close family friend, Troy Kennedy, to take part in the emotional jersey presentation.

Reuben said his late father, James, and late brother, Sam, who died in 2016 and 2019, were his biggest supporters, and that both were on his mind as he ran out against the Cowboys.

“I’m sure they were happy for me, they were such big supporters of mine, and they sacrificed everything,” Reuben told the Herald.

“They were there with me in spirit. They backed me my whole career. It was my dream to play one game in the NRL, but every time I step on the field I think of them.” 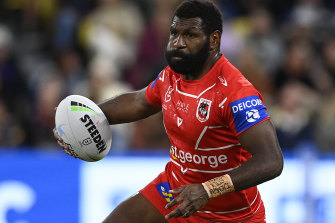 Reuben, who was given the nod when Mat Feagai was struck down by illness, said coach Anthony Griffin told him to be ready earlier in the week.

“I found out at 5pm I was playing and I was buzzing,” Reuben said. “I’d already arranged for my mum and family to get tickets to the game because they live in Townsville. When I called mum and told her, she went all silent and started crying. It made me want to cry.

“During the [jersey presentation] mum could only whisper, she was speechless, but she said, ‘your brother and dad would be so proud of you’.”

The call-up was so last minute that Reuben’s girlfriend was still stranded in Brisbane and unable to make the rushed trek north.

Reuben was in the Sydney Roosters full-time squad in 2014, but only lasted a year because of homesickness. He had train-and-trial deals with Brisbane and Melbourne, a brief stint in rugby, while in the Queensland Cup, where he won the competition with Norths Devils last year bagged an astonishing 107 tries in 106 games.

Reuben said he was often mistaken for being Fijian because of his appearance, and was happy to set the record straight. 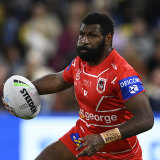 “But I’m a proud Aboriginal and Torres Strait Islander – I can even do a deadly ‘shake-a-leg’,” Reuben said. “I also prefer Jon. I only get Jonathon when I’m in trouble.

“People kept saying I was too old [to persevere]. I guess 29 is the new 21. My goal was to play one NRL game. I’ve done that now. If I get another game, I’ll be grateful and put my best foot forward. I was able to win a premiership last year, but my debut is up there with that.”