If the likes of Isaac Heeney, Callum Mills and, more recently, Errol Gulden and Braeden Campbell are the poster boys for the Swans’ academy, then Luke Parks is the club’s pin-up for the future – even if he plays for Carlton.

A 20-year-old from St Ives, Parks learned his craft through the Swans’ nursery but has taken a circuitous route to the top. 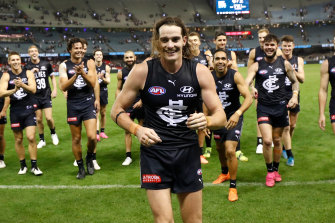 Carlton’s Luke Parks is a product of the Sydney Swans’ academy system.Credit:Getty Images

While some rivals feel the Swans have an unfair advantage through their academy, the club has aspirations for its production line to become an exporter of elite NSW talent.

“We are genuine when we say we want to produce talent to all 18 clubs,” the general manager of the Swans’ academy Chris Smith said. “We have to make recruiters at other clubs see that we can make their list better. Luke is an example of that.”

Like many in the Swans academy, Parks arrived to football through another code. In his case it was rugby, which is evident in the aggression he shows at the contest and his appetite for tackling.

Drawn to the game by his older brother Ben, Parks found football better suited his rangy frame and athleticism. 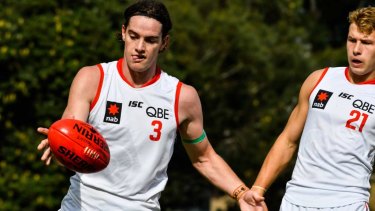 He attracted the attention of academy scouts at the Paul Kelly Cup and realised at under 16s level he had the ability to aim for the top. If not for the academy, Parks doubts he would have made it to an AFL list.

“I was there for eight years, they shaped the footballer I am today,” Parks said.

Unfortunately for Parks’s family and friends, many of whom made their presence felt in the Marvel Stadium stands on his debut this year, he is not in Carlton’s 22 for Sunday’s game though could still grace the SCG as the medical sub.

Any success Parks will have is likely to come in a rival club’s jumper but the Swans take great satisfaction in one of their own having a chance elsewhere.

“You know their story, you remember them as fresh-faced 12-, 13-year-olds – and here they are,” Smith said.

“They started off with quite a hefty dream that requires a lot of hard work but also a pinch of luck. Then to see them running out and competing at the highest level, be it with the Swans or in a Carlton jumper, you’re proud of them and wish them the best and hope they make it.”