Struggling Saint Hill returns after brief trip back to WA

Bradley Hill has returned to Melbourne as he and St Kilda look to turn their flagging seasons around against high-flying Port Adelaide at Adelaide Oval on Sunday night.

The much-maligned Saints wingman headed home to Western Australia following his side’s thrashing at the hands of Richmond at Marvel Stadium on Thursday night. Sources indicated the trip was pre-planned and unrelated to Hill’s on-field struggles. Instead, St Kilda’s 10-day break presented a good opportunity for Hill to visit loved ones in Perth before heading back to Victoria.

While far from alone in playing poorly against the Tigers, Hill’s 10-disposal showing helped ensure he was a lightning rod for criticism and vitriol from St Kilda fans, to the point the club issued an official statement via Twitter on Friday morning condemning “personal attacks on players or the minorities they may represent.” Hill was not the only player to come under fire from these online attacks but was the primary target.

The three-time Hawthorn premiership player has failed to consistently reach his best since being traded from Fremantle to the Saints at the end of 2019 on a long-term and lucrative deal, missing the top 10 of the best and fairest last year despite playing every game and averaging fewer than 18 disposals in five rounds to start 2021.

But St Kilda coach Brett Ratten was adamant after the Richmond game that Hill would not be dropped ahead of the meeting with the Power.

Having been thumped by Essendon in round three, the Saints responded with an inspired 40 minutes of football to overhaul West Coast at Marvel in round four. But they were unable to replicate anywhere near that showing against the Tigers.

The scale of St Kilda’s second-half capitulation against the reigning premiers was laid bare in several key statistics, including the fact the Saints had just 11 inside 50s after half-time; St Kilda’s lowest second-half inside 50 total since a 145-point loss to Hawthorn in round seven, 2014 at a wet MCG.

The second-half horror show against the Tigers also saw the Saints lose contested possessions by 32, clearances by 17 and inside 50s by 23.

St Kilda players reconvened at Moorabbin on Monday for a day of meetings and soul-searching. Zak Jones (managed) and Rowan Marshall (foot) should both return against the Power, while Paddy Ryder is also on the cusp of playing his first senior game for the year following a solid training block after leaving Victoria last month for personal reasons. 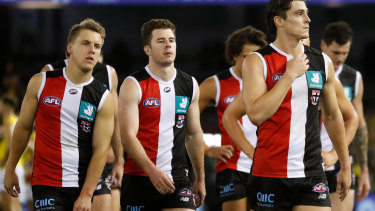 The Saints were thumped by Richmond last week.Credit:Getty Images

Veteran big man Shaun McKernan put his hand up for a senior recall with 23 disposals and four goals against Richmond in the VFL at Punt Road on Friday, while speedy young midfielder Ryan Byrnes had 22 disposals and a goal in what was his first game back from a hamstring injury.

Ratten said after Thursday night’s game that the Saints are keen to inject Byrnes into their side. He would potentially provide a point of difference from St Kilda’s current midfield led by Jack Steele and consisting of Jack Bytel, Brad Crouch, Seb Ross and Luke Dunstan, who filled in for Jones against the Tigers.

Jade Gresham is out for the season with an Achilles injury, while Dan Hannebery is a mid-season prospect because of his latest calf injury.