For the second time in the 2022 NRL season, the Storm cashed in on a flat second half by the Warriors, winning 24-12 at Mt Smart Stadium in Auckland on Friday night.

After a tumultuous week in the NRL, which started with a refereeing controversy and continued with the Manly inclusivity jersey saga, the Warriors would have been happy just to be sliding under the radar in their second home game of the season.

But the Storm had them in their sights, taking the direct approach and laying on a series of heavy shots soon after kick-off.

Nelson Asofa-Solomona’s hit on Wayde Egan left the Warriors hooker with a suspected broken jaw after only a few minutes, an act that resulted in the Storm prop being placed on report and the big Mt Smart crowd incensed.

The Storm cashed in on the forced reshuffle. Justin Olam cruised through some very weak defence on the left edge.

What looked like a possible eye gouge by Josh King on Jazz Tavaga fired the Warriors up, and Ed Kosi flew into the corner after a cut-out pass by Chanel Harris-Tavita. King was also put on report, and he and Asofa-Solomona could be facing a spell on the sideline. 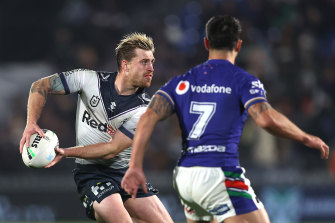 Queensland hooker Harry Grant got the Storm back on track with a try off a Felise Kaufusi break. Some Storm ill-discipline promptly gave the ball back to the home side, and Kosi made it a double with five minutes to go in the half.

But hopes the Warriors fans had of pulling off a win over their storied rivals didn’t last much longer than the break.

Jahrome Hughes scored almost straight after the restart, then replacement fullback Nick Meaney got on the end of a pinpoint centre kick by Grant Anderson to make the score 20-8.

A big mistake by the Warriors shortly after saw them concede a penalty straight out in front, which Meaney slotted to increase the lead to 12.

However, Meaney left the field soon after with a nasty-looking shoulder injury. It will be a concern for coach Craig Bellamy, who is already missing regular fullback Ryan Papenhuyzen.

Kosi crossed for a well-deserved hat-trick, but it was too little, too late.

The loss leaves the Warriors anchored in the bottom four while the Storm move up to a share of fourth with the Broncos.