Stats all folks: The piece of data that holds the key to NRL success

The most important factor in NRL games is limiting the opposition’s running metres, the statistical category most likely to decide whether a team wins or loses.

The Sun-Herald has conducted an analysis of the past six NRL seasons, assessing the reasons for the outcome of each contest. While coaches often talk at length about completions, possession and errors in their post-match press conferences, none of those indicators are among the top-10 pointers to success.

Perhaps surprisingly, teams that limit the opposition’s running metres most effectively are the ones that have won the most games between round 18 of 2016 and round 18 of 2022, based on a regression analysis. The study, based on figures provided by Champion Data, suggests that one statistical category alone can have a 17 per cent influence on the outcome of any given fixture.

Melbourne have led the field during this period, conceding just 1368 metres a game on average, well below the league average of 1496m. Next best are Penrith, South Sydney and Cronulla, while Canterbury are the worst with 1589m . There is a strong correlation between performance in this area and where a team finishes on the NRL ladder.

This year’s trend has been no different, with the better-performing teams, such as the Panthers, able to severely restrict their opposition’s yardage.

Former Brisbane and South Sydney coach Anthony Seibold, now working as a member of the England national rugby team’s staff alongside Eddie Jones, wasn’t surprised by the importance of yardage in determining outcomes.

“It makes a lot of sense, you’re onto something there for sure,” Seibold says. “If you strip it back, AFL, rugby and rugby league are invasion games, you’ve got to get up the other end.

“If you look at what that top stat is when the numbers are crunched, in this case opposition run metres, if they have higher run metres then that means they are coming down to your end of the field more.

“In rugby for instance, they look at invasions into opposition 22. When you think about how they get down there, they have to run. It goes back to field position and having possession in that field position.

“And I’ve seen teams with high completion rates lose games. You’re onto something there in looking at the game differently and what actually has an impact on winning and losing. And I reckon your No.1 [factor] there is bang on because it means you’re getting into the opposition’s half. If you do that, you’re putting field position pressure on the opposition.” 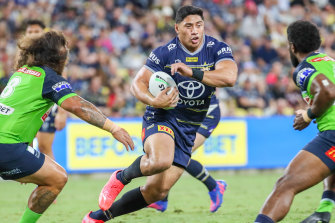 Jason Taumalolo has been one of the NRL’s best metre-eaters for years, and limiting his impact is crucial to success.Credit:NRL Photos

So, why are run metres conceded more important than run metres gained? Perhaps the psychology of repelling an opponent harms a team’s confidence and, therefore, their execution. To illustrate, restricting run metres has been measured as having a stronger correlation with opposition errors than simply advancing the Steeden.

Former premiership-winning coach Michael Hagan, now an assistant to Kangaroos coach Mal Meninga, was unsurprised that metreage came out as a key indicator.

“I tend to agree with that,” Hagan says. “I think it’s two things: metres gained and conceded in combination with kicking metres, that’s a critical one as well. If you tally those up, you’d be in front more often than not.

“The other one is goal-line defence; that ties into that. It’s about not giving the opposition too many cracks at your end. Some teams talk about the cycle of pressure, that’s what they work on. Giving the opposition the least number of starts in your 30 to 40 metre zone.”

“Completion rates and missed tackles, for me, are an outdated way of looking at it.”

The Sun-Herald’s analysis found that the next biggest indicator of success after yardage conceded was line breaks surrendered, line-break causes and run metres gained, with line breaks achieved rounding out the top five.

Based on the results, the biggest misnomer in rugby league is that completion rates are the be-all and end-all in deciding results. For proof, look no further than Canterbury, who had the best completion rate last year, but scored the least number of tries and finished with the wooden spoon. 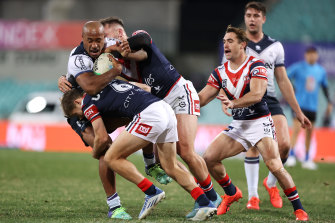 Cutting down the opposition’s running metres with strong defence is key to victory in the NRL.Credit:Getty

“Clubs feel that to play to their strengths, there may be a certain statistic they want to be dominant in because it suits their style of play or coaching.

“You can also have the best completion rate and not score a try. It’s a matter of how much movement of the football is creating momentum, whether you’re gaining those metres that are so important.”

Coaches often lament the number of tackles players miss, but that often isn’t the root cause of a result. A good example was this month’s State of Origin decider: the Maroons’ defence was superb, yet they missed 57 tackles, compared to 44 by NSW.

“Completion rates and missed tackles, for me, are an outdated way of looking at it,” says Seibold, a former Dally M coach of the year. 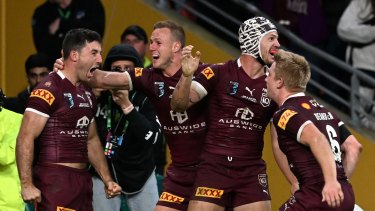 The Maroons triumphed in Origin III despite missing a lot more tackles than NSW.Credit:Getty

“Missed tackles aren’t an indicator of whether you win or lose because I’ve seen the Storm and the Roosters miss 40-odd tackles and still win games.

“Just go back to Origin III, Queensland missed a lot of tackles, but they won the game. They were physical and they were great defensively.”

One basic, yet effective, coaching tactic that helps restrict opposition yardage is utilising a swarming defence, a key tactic employed by coach Ricky Stuart during his premiership season with the Roosters in 2002. However, few teams can consistently maintain the line speed required to execute the strategy successfully.

Given yardage plays such a big role in outcomes, having players capable of eating metres is of paramount importance. Joseph Tapine, Reagan Campbell-Gillard, Jason Taumalolo and Isaiah Papali’i are the most effective forwards in the game, having all run for more than 2500m so far this season.

However, players with a proportion of runs gaining more than the average of 8.33m are vital. Ben Murdoch-Masila, Addin Fonua-Blake, Jacob Kiraz, Eliesa Katoa, Bunty Afoa and Taniela Paseka are largely unheralded but provide plenty of line-bending value for their buck in this category.

While the coaches are aware of the stats that matter, getting their troops to execute the game plan is another story.

“It all makes perfect sense, and we’re trying to achieve the same thing every week,” Hagan says. “If you could get it done 10 times out of 10, I’d still be coaching.”

* Ramy Haidar is a sports consultant working as an external advisor to the Brisbane Broncos’ head of football.