Saints star Gresham out for season as Stewart, De Goey and Lynch named to play

St Kilda’s finals hopes have taken a major blow with Jade Gresham out for the season while Collingwood and Geelong have named Jordan De Goey and Tom Stewart to return this weekend.

The Saints have ruled out Gresham for the rest of the season with a knee injury but they welcome back former Sydney star Dan Hannebery to play his first game in almost a year having not appeared since round 23 last year due to injury.

Gresham, 24, left the ground in the fourth quarter last week and scans have shown a medial meniscus tear which requires surgery. 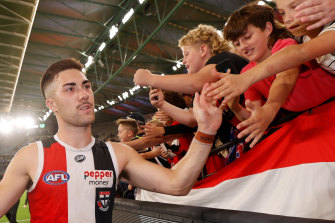 “This is a big blow for Jade, who has already had a very injury-interrupted past few years,” said Saints head of football David Rath.

“Given Jade’s history, specialists have also recommended a PCL reconstruction, so this will mean a five-month rehabilitation process.

“This is hugely disappointing for both Jade and the club, but when it comes to the long-term health of our players nothing comes above that.”

Jack Billings is also out with a back injury and the Saints are unsure of the timing of his return. Billings had treatment this week and they hope to have a better idea of his status after this round.

Geelong will welcome back star defender Stewart from suspension but lose playmaker Zach Tuohy to COVID-19 protocols while ruckman Jon Ceglar comes in for the injured Rhys Stanley for their clash with the Western Bulldogs on Saturday.

Caleb Daniel is back for the Bulldogs as is Zaine Cordy while Adam Treloar is out injured.

Bulldogs key defender Alex Keath has been omitted despite the threat of Geelong’s key forwards Tom Hawkins and Jeremy Cameron.

De Goey is back from injury for Collingwood to face Port Adelaide on Saturday with the Magpies chasing a 10th-straight win while forward Brody Mihocek is out injured.

The Power will be without key players Daniel Houston and Riley Bonner while Xavier Duursma and Trent McKenzie headline their inclusions.

Richmond have brought back Tom Lynch after he trained well on Thursday.

Hawthorn will have some much-needed inclusions for their clash with St Kilda as Changkuoth Jiath and Jacob Koschitzke rejoin the team along with Sam Butler.

Melbourne has named star defender Jake Lever to return for the clash with Fremantle who will bring back leading goal-kicker Rory Lobb.

The Gold Coast Suns will give No. 5 draft pick Mac Andrew his debut with the athletic big man having the chance to show what he can do at the top level while Leek Aleer, a defender who was the No.15 pick last year, will make his debut for GWS Giants.

Richmond’s Shane Edwards plays his 300th game this round and Tigers coach Damien Hardwick praised his stalwart utility on Thursday.

”We often show our players the things that he does that are unseen and only seen when you watch the tape,” Hardwick said.

“I will never forget when I first got this job, Geoff Morris, a good mate of mine in South Australia said ‘you’ve got a beauty in Shane Edwards, just play him every week’ and ever since I’ve been here, I don’t think he’s played a reserves game.

“He’s a three-time premiership, an All-Australian, 300 games and I think he captained our club for a couple of games.”

Hardwick added that what people missed most about Edwards was the way his positioning and movements allowed other players to get the ball.

”I think the very best players put other players in space, but they also just make a positional change that allows another player to get a valuable possession and that’s what Shane does,” Hardwick said.

“Shane’s never been a huge stats guy but what he does is he allows players to play their very best footy in. Whenever I look for a spark to get our side back up – the first guy I’ve gone to Shane Edwards as you can put him in the middle, put him up forward or put him down back.

“We often joke that we still haven’t figured out his best position and he’s played 300 games.”

Kane Lambert, who retired this week, will fill roles in the football department for the rest of the season as Hardwick wants to make use of his football IQ and experience.

Hardwick said he took exception to people wrongly claiming his side had misused their medical sub last Friday when Ben Miller was replaced in the final term by Maurice Rioli Jnr.

“Ben can either try and push on, but he could possibly miss two weeks or we can get Ben off.”

Hardwick said he would like either side to be able to use their sub in the last quarter if he hasn’t previously come on.

“It’s good to have a sub but once the last quarter comes into play, I think you should be able to activate a sub.

“It’s a good position for a young, dynamic player to come on, like MJ last round, but it is for smarter men than me to figure out.”