A spiritless first half from North Melbourne left them chasing tail all afternoon in Sunday’s thumping loss to Greater Western Sydney.

And their day could be soured further after No.1 draft pick Jason Horne-Francis’ swinging arm made high contact with Josh Kelly early in the third quarter. 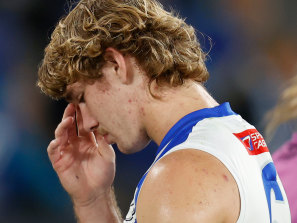 Jason Horne-Francis is likely to face scrutiny from the match review officer.Credit:Getty Images

While the Roos were competitive in the second half, the game was effectively over at the long break.

The Giants kicked five unanswered goals in the opening term, and seven goals consecutively before the Roos got their first major nine minutes into the second via Curtis Taylor.

North were competitive in the stoppage department and at the centre clearances, but just couldn’t get the ball back from the Giants, who had 39 more kicks and 38 more handballs in the first half.

Todd Goldstein and Tristian Xerri dominated in the ruck, racking up 58 hitouts between them, but the Roos were unable to capitalise.

The battle was relatively even in the second half, as the Giants increased their 47-point half-time margin to just 49 by the final siren.

Jason Horne-Francis will face scrutiny from match review officer Michael Christian for a swinging arm on Josh Kelly early in the third term.

The young midfielder appeared frustrated in the lead-up to the incident, and the contact was late.

Horne-Francis had touched the footy just three times up to the incident, and finished the day with eight. Kelly continued to play on after the contact.

North Melbourne great Wayne Carey said on Triple M radio he was concerned about Horne-Francis’ body language in the lead-up to the incident.

At that point, the Roos trailed by 54 points.

Former Magpie Jaidyn Stephenson had just one mark and one handball to his name at half-time of Sunday’s clash.

In his first game back after a stint at VFL level, the second-year Roo struggled to get near the ball in the first half, spending periods through the midfield and forward line. He finished with just five touches, but he wasn’t alone.

Captain Jack Ziebell had just six touches and Hugh Greenwood was also quiet with eight. The Giants had 128 more disposals and 80 more marks for the match.

Three games into Mark McVeigh’s stint as interim Giants coach, he’s taken a 2-1 win-loss record, albeit the wins coming against West Coast and the Kangaroos. 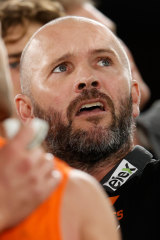 Mark McVeigh has coached two wins from his three games as mentor of the Giants.Credit:Getty Images

GWS duly smashed the Eagles by 52 points in round 10, before getting within 14 points of the Lions in Brisbane.

Sunday’s thumping win saw them move to 4-8, after starting the season 2-7 under Leon Cameron. The percentage-booster saw them jump Hawthorn and Adelaide, who are also 4-8 after 13 rounds.

Stephen Coniglio has been one of the biggest improvers under McVeigh. He played just seven games in 2021 and averaged 14.7 disposals, while in his nine games under Cameron this year, he averaged 20.9. But in his past three matches under the interim coach, he’s returned hauls of 36, 25 and 34 disposals.

Young gun Tanner Bruhn also had a breakout game. He amassed a career-high 24 disposals to go with two goals in his 22nd game at the elite level. The Geelong Falcons product was drafted at pick 12 of the 2020 draft.

Harry Himmelberg also had a day out, with 37 disposals, 16 marks and a goal.

Sunday’s crowd of 13,742 at Marvel Stadium was slightly better than the 13,422 that attended the Demons’ win over the Kangaroos at the same venue in round 10. That match was held in the 4.35pm Saturday twilight slot. 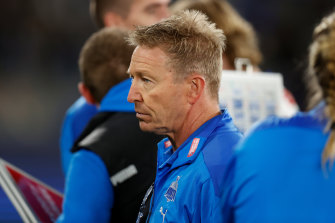 Another loss to North Melbourne under coach David Noble.Credit:Getty Images

For further comparison, 14,204 attended the Roos’ win over the Eagles in round two, also at Marvel Stadium.

The Giants have played in front of five smaller crowds this season, three in Sydney and two in Canberra.