Gerard Sutton and Peter Gough have paid the price for their errors after the NRL overlooked them for referee appointments this weekend.

Gough has been demoted to touch judge duties for the Eels-Tigers clash, while Sutton will be in the bunker for the Sharks-Storm encounter. Sutton was the standby referee for State of Origin II, but that role for the decider has gone to Adam Gee.

Sutton earned the ire of Roosters referee Trent Robinson, who labelled his performance “not good enough” after a series of contentious calls. Among them was the decision to penalise Sam Verrills for a tackle on Scott Sorensen just before half-time, which NRL head of football Graham Annesley conceded was incorrect.

Raiders coach Ricky Stuart was also fuming with the way Gough officiated the final stages of his side’s loss to the Dragons. Annesley conceded that Ben Hunt could have been sent to the sin bin three times during the final set of six, when Canberra were pressing the line in search of the match-winning try or a penalty to level up the scores.

The decision not to impose a greater sanction than a six-again call has cost Gough the chance to officiate this weekend.

Both whistleblowers were overlooked when the refereeing appointments were announced on Tuesday in what is a split-round of football. There will only be four NRL games as half the teams enjoy byes ahead of next week’s State of Origin decider. 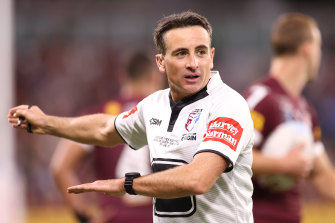 Referee Gerard Sutton has been dropped.Credit:Getty

Robinson and Stuart have both previously been fined for excessive criticism of the referees, but are likely to escape sanction after the NRL conceded some of their criticisms were valid.

ARLC chairman Peter V’landys said the six-again rule is here to stay despite claims some teams were gaming the system by deliberately infringing. Annesley said it was up to the discretion of referees whether or not to blow a full penalty during his weekly media conference.

“I think it’s been a massive bonus for the game in terms of continuity,” Annesley said. “The whole objective that we have is to try and have the referees interfering with the game as little as possible.”

Meanwhile, the NRL has confirmed Ashley Klein will control the State of Origin decider at Suncorp. It means the same officiating group- Klein, alongside touch judges Phil Henderson and Drew Oultram – from game II in Perth has been retained.

“Ashley has refereed extremely well in the opening two Origin games and deserves to officiate in the final game of the series,” said the NRL’s general manager of elite officiating, Jared Maxwell.

“These officials have been very good through the series and additionally in the premiership. Their experience in the big games will be extremely important in a decider.”

In club news, Jayden Brailey will play his first game of the seasom from the interchange bench, for Newcaslte. It’s a double boost for the Knights, with Bradman Best (elbow) also returning for the clash with South Sydney.