Peter Ladhams loves playing at the Adelaide Oval but the former Port Adelaide ruckman knows he is likely to be public enemy No.1 when he takes the field at one of Australia’s great sporting venues for the Swans on Saturday.

After five years the Power, where he had limited opportunities, the 203cm Ladhams will continue his rise as a key part of the Swans line-up as they continue their push towards the finals. 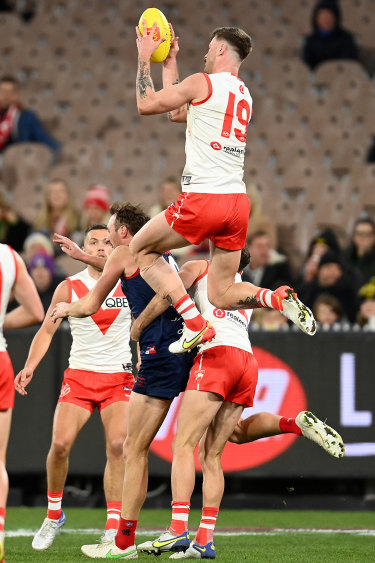 Peter Ladhams flies high to mark in the Swans’ most recent win, over Melbourne.Credit:Getty Images

“It definitely feels pretty weird,” Ladhams said of facing his former side in Adelaide, his home town until moving to Sydney after last season.

“I’m looking forward to it. It will definitely be a weird feeling. Obviously Adelaide Oval is such a great oval.

“I’ve always been on the good side of the Port faithful. Being on the opposition side it might get a bit hostile out there but I’m really looking forward to it. It should be good fun. A day game at Adelaide Oval and we’ll have the red footys out.”

The Swans have a great reputation for recycling ruckmen. They proved it again last season when Tom Hickey, aged 30 and at his fourth club, had the season of his life to help carry the Swans into their first finals campaign for three years. 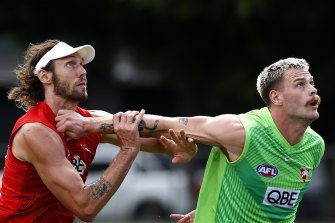 Unfortunately Hickey’s season has been interrupted by knee and now toe injuries. He is making his way back through the reserves again as Ladhams carries the suddenly inherited mantle of No.1 ruckman.

Coach John Longmire has been delighted with the contribution Ladhams has made and the load he has carried.

“Peter has been very important for us,” Longmire said. “Since coming into the team he’s been improving every week after a disrupted pre-season with some tendinitis issues with his knee, and just coming over (from Adelaide) and getting used to everything that was going here.”

Longmire is unsure how Ladhams will deal with coming up against his old side at a venue that can be a cauldron for visiting teams.

“I’m sure he’s got still some strong friendships back there like any player that leaves a club, but ultimately, it’s about your preparation and being professional and getting the job done,” the coach said.

For Ladhams, joining the Swans wasn’t just a matter of changing clubs. It was more a rite of passage leaving home and moving to Sydney.

“Obviously having your parents and family in Adelaide, that can be quite easy and you can get pretty comfortable,” Ladhams said.

“Moving to a completely different city where you don’t know anyone at all, putting yourself in the deep end and trying to mature and just learn some new things and learn some new skills.”

Sydney was more different than he realised. 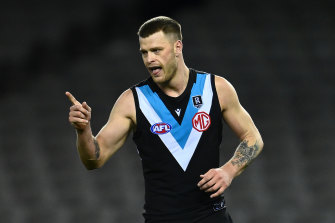 “I’d only been to Sydney once before and I didn’t realise how much people don’t actually know about AFL or how much NRL-dominated it actually is,” Ladhams said.

“Coming from Adelaide, I still don’t know the rules of rugby. It was never on TV, it was always just AFL. That’s all you know, all you ever played in the schoolyard. So yes, it’s completely different.”

But for Ladhams, moving to a city dominated by another code has its advantages.

“It’s obviously a good thing, because in Adelaide you’d get noticed a lot,” he said. “Even before I played games (for Port Adelaide), people seeing you would know you, which is crazy to think about. 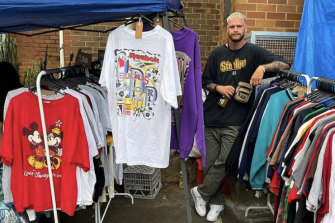 “But here I haven’t been approached once, and it’s pretty good and refreshing.”

Ladhams is a quiet man who is known around the club as a bit of a snappy dresser.

“I do think I dress all right, I do like my fashion,” Ladhams admits.

His interest outside football is “vintage” American t-shirts mainly centred around sport. He and former Port Adelaide teammate Aidyn Johnson import them as a “side hustle” and Ladhams has sold them at Glebe’s Saturday morning markets, where he hopes to spend more time during the off-season.

“It’s a cool way to meet some new people who aren’t footy related, especially being in a new city,” he said.

But it will be the reunion with his old fans in Adelaide which will create the most interest on Saturday.