Papley ready to bring the energy in long-awaited Swans return

Tom Papley doesn’t belong in a headset. One day, maybe, but not yet.

It’s been quite jarring for Swans fans, whenever the camera has panned to the bench on match day, to see their club’s spiritual leader in a polo shirt and slacks, wired up with the coaching staff and analysing the game from a different perspective, instead of being in the thick of battle where he does his best work. 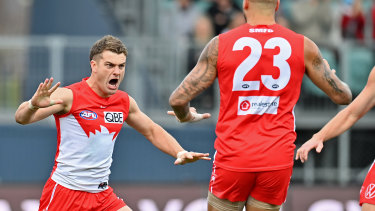 For the first six rounds of this AFL campaign, the 25-year-old has had to suck it up and make do with that being his main contribution to the team’s cause after tearing his hamstring in pre-season – which, for a bloke who plays with so much emotion, is much easier said than done.

“I struggle to just sit at home or in the stands and watch it,” Papley said. “I like to be involved.

“I think I see the game all right. It’s a lot of structure stuff … you can see when you don’t set up properly what happens, or not get high enough or whatever. You can take a little bit out of it but, when you’re playing, it’s a lot different, when it’s instincts and things like that. It’s a good experience for me, something I can learn from.”

Second only to Lance Franklin in Sydney’s top goalkickers list last season, when he also earned his first All-Australian blazer, Papley’s hamstring setback was his first major brush with injury in his career, disrupting the incredible momentum he had built up through a cracking 2021.

“I probably had one of my best pre-seasons as well this year, the most I’ve ever done,” he said. “I was the fittest I’ve been. It was very annoying, but it is what it is. I’d never done [a hamstring] before, obviously, but I did feel something go and I thought, ‘That’s not good’. It was a different experience, not one you want to be doing often. That’s footy. But it makes it easier when the boys are winning.”

The wait, thankfully, is over, with Papley set to make his long-awaited return on Sunday in the most anticipated match of the round against the Brisbane Lions. It’s some sort of luxury for the Swans to be able to inject a player of his calibre into a team that is 5-1 and hurtling towards another finals campaign.

They’ve hardly struggled to kick goals without him, given Sydney is the AFL’s third-highest scoring team this year. The benchmark setters in that regard are Brisbane. But it’s something a little less tangible that Papley is excited to add to the mix; a sensation that often reverberates through the stands at the SCG, too.

“One of my best traits is just giving the team energy and getting the boys up, whether it’s a goal, a tackle, pressure, things like that – I’m good at providing energy to the group,” he said.

“And then it’s just about playing my role for the team and not trying to do anything too special, just keep playing the team game, because that’s what it’s about. It’s not about the individual accolades, it’s about how we can win.”

It was a victory over the Lions in last year’s season opener that set up a sparkling year for Sydney – not that Papley has pondered it much since.