Panthers and Eels could lose star No.7s in major shake-up to NRL season

Western Sydney heavyweights Penrith and Parramatta could be without their star No.7s for the remainder of the regular NRL season through suspension and injury.

As Nathan Cleary was charged with a grade-three dangerous throw, and now faces a five-match ban with an early plea for his “dumb moment” in spearing Dylan Brown head first into the turf, the Eels were awaiting scans to confirm a suspected broken finger for Mitchell Moses.

Moses suffered the finger injury before half-time during the Eels’ 34-10 win over the premiers, but was able to complete the game and showed no signs of discomfort afterwards in the sheds.

Should Moses require surgery, he will be sidelined for a month and Jakob Arthur will likely be elevated to the starting side.

The loss of Moses would hurt Parramatta more than the Panthers being without Cleary because of their ladder position and need to keep winning during the final five weeks of the year, starting with Friday’s trek to Manly.

Meanwhile, Penrith officials were urgently seeking legal advice about whether to go the NRL judiciary and seek a downgrade for Cleary, who was sent off for upending Brown. Brown later conceded he was “pretty lucky” to avoid series injury in the incident.

Nathan Cleary was sent-off for this lifting tackle on Dylan Brown.Credit:Nine

As the result of a dangerous contact charge in round six, Cleary is facing an extra week in the stands because it was his second offence for the season. He will be suspended for five weeks with an early guilty plea and six weeks if he contests the charge and loses. It is very unlikely the Panthers will challenge the charge.

However, one option for Penrith is to plead guilty and dispute the grading, which, if successful, means Cleary will miss just the three games. That would allow him to return for a home game against the Warriors in round 24, and the potential grand final preview against the Cowboys in Townsville in the final round.

Either way, the Panthers are not concerned about Cleary being physically underdone by the time he does return. After enjoying an extended break following Origin III, Cleary could enter the finals with just 98 minutes of football under his belt in nearly two months.

The Panthers, however, believe the game-like intensity at training these days will ensure the ultra-diligent halfback will be in peak condition.

Cleary looked numb the moment he put Brown into a dangerous position, cut a lonely figure in the sheds at half-time and later expressed his disappointment on social media.

“Massive apologies for tonight,” he wrote on Instagram. “Filthy at myself for such a dumb moment that let the boys and the fans down. I’m not about that, it was terrible technique and I need to be better.”

The Panthers are already without five-eighth with Jarome Luai who is sidelined for a similar timeframe with a knee injury. 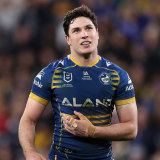 Sean O’Sullivan and Jaeman Salmon are likely to get the nod as the back-up halves moving forward, and the pair did well in the second half against the Eels, who led 30-4 at half-time but failed to put the foot on the throat in a 34-10 win.

Parramatta five-eighth Brown was able to bounce to his feet and finish the game. He knew Cleary was shattered and needed no reminding of what a dangerous position he placed him in.

The fact Brown was able to finish the game was taken into consideration by the match review committee.

“I’m fine,” Brown said. “Obviously it was a shit tackle, but I got up feeling sweet.

“Obviously it hurt a bit, but once I was up I was fine. Hopefully ‘Nath’ knows I’m sweet. I didn’t see him after the game, although I know if I was to do a tackle like you worry about the player.

“When I got up I didn’t know how bad it was – you don’t really know when you’re getting tipped upside down.

“Then I looked up and [spotted the replay] and thought, ‘That’s a couple of weeks [suspension]’. I came out of it pretty lucky. Who knows, hopefully he isn’t charged too badly.

“He said sorry straight away.

“We play each other to hurt each other, but legally. I’m sure he had no intentions of doing that, and I’ve got no hard feelings.”

Brown said he landed on his back – not his head – and “my neck is fine”.