‘One more step’: From Hawk to Cat, Isaac Smith has embraced the change

Chasing success was one of the reasons Isaac Smith left Hawthorn for Geelong. Now, he’s one step away from lifting the AFL premiership cup, something he has plenty of experience with.

“There were probably a couple of reasons. One was to be part of a successful team,” the veteran wingman, a triple-premiership player with the Hawks, explains. “Impart a little bit of my knowledge and hopefully help Geelong get to a premiership; we’ve got one more step to get there and Sydney are in our way. 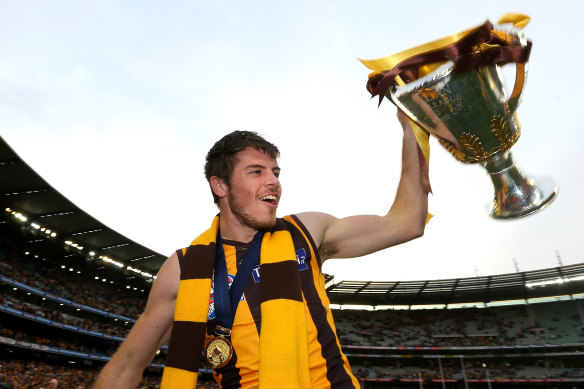 Smith with the 2013 premiership cup during his time as a Hawk.Credit:Getty Images

“The other reason was, Geelong is a great organisation and a great football club and purely from a selfish point of view, to be able to learn how they operate and how they do things has been invaluable.”

Smith is days away from making his fifth grand final appearance. But though he’s been in this position many times before, the circumstances could not be more different.

As a young man in his mid-20s and playing in big finals with Hawthorn year after year, Smith was living off Swan Street in Richmond, barely a kilometre away from the MCG. 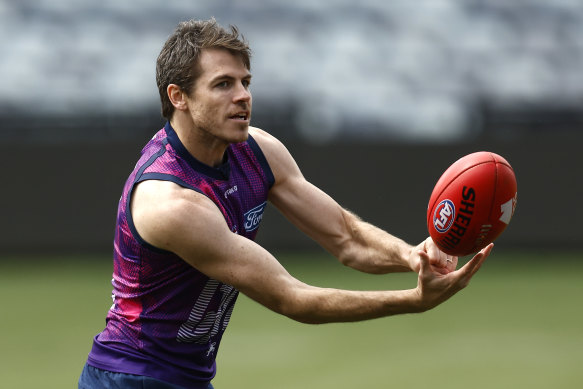 Smith fires off a handball at training on Monday.Credit:Getty Images

He’d be lucky to get a few metres down the road without copping a comment from a footy fan; be it a passionate Hawk or just someone praying to the football gods that the brown and gold success would stop.

Now 33, out of the Melbourne bubble and playing for one of Hawthorn’s most hated modern rivals, Smith is relishing the peace and quiet. At least he is when his young daughters Isla and Emma sleep through the night.

“I don’t get out much these days,” Smith chuckles. “I’m either at the footy club or I’m at home with the kids.

“It’s very low-key. But it’s also nice because you have the whole town behind you. In Melbourne, you’ve got a multitude of fans, so I certainly copped more abuse in Melbourne.”

Smith cut a relaxed figure on the bench after open training at GMHBA Stadium on Monday. He’s used to the big stage – he’s played in 26 finals. 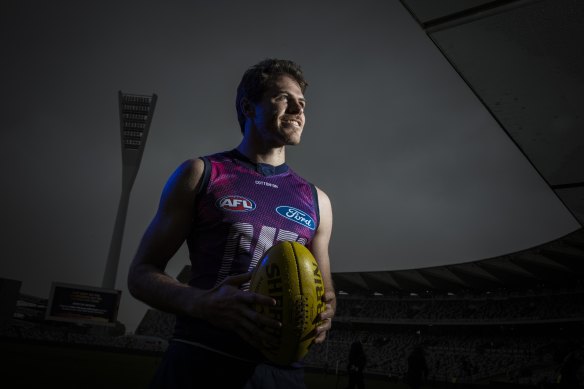 Isaac Smith had plenty of premiership success with Hawthorn. Now he is gunning for a flag with Geelong.Credit:Chris Hopkins

Given that Smith has played for two of then most successful teams in the modern era, it’s difficult not to wonder if the organisations are at all alike and while Smith admits there are “a hell of a lot of similarities,” he was reluctant to say too much. “I won’t be giving up any trade secrets,” he laughed.

If the Cats are victorious on Saturday, Alastair Clarkson and Chris Scott would have combined to win five of the last 15 available premierships; a remarkable feat given how often clubs remind their fans how difficult it is to win flags.

“They’re polar opposites, except they’re both highly competitive and both really want to win,” Smith says when quizzed about his two AFL coaches.

Just how different the two are is a matter of perspective. Clarkson was loved and respected by the players he achieved success with, but his micromanaging style did grate on some, particularly towards the end of his reign.

Scott, on the other hand, is well known for his hands-off approach and encourages his players to disconnect from football when they leave the club.

This has created challenges for some players at the Cattery over the years, who sometimes wondered if Scott was too detached.

But the happy-go-lucky Smith, who relies on hard work as well as instinct, has found the change from one to the other refreshing.

“Geelong is well known for that aspect and Chris is certainly the one who drives it and it certainly sits within my values as well.”

So, does a man with this much September experience still get nervous in grand final week?

“There’s no point getting too worked up about it,” Smith smiles.

“When the ball gets bounced at 2.30, you know you’re going to put everything out there and it’s either go one way or the other. You’re going to do everything you can to make sure it goes your way, but there’s no point getting stressed about it.”